Sixteen youngsters from Manokwari, West Papua, discussed and observed ecological crisis in their surroundings. They were called to realize their roles in ecological problems while thinking of the future of West Papua. Those Manokwari youngsters are expectedly to make a collaborative action for a change.

The youngsters from various communities in Manokwari took parts in Youth Camp organzied by EcoNusa in collaboration with PELAMPAR (Komunitas Pecinta Alam Papua Barat/West Papua Nature Lover Community). The Youth Camp on 30 June to 3 July 2022 in Lemon Island, East Manokwari District, West Papua, was expected to become tool for the young Manokwari people to articulate their challenge, potential, expectation, and role for West Papua, in the next ten years. Lemon Island is on Doreri Bay or commonly called Nusmapi Island is one of the islets which is located 10 minutes away by boat from Manokwari.

Novi Hematang, EcoNusa’s Coordinator in Manokwari Office, attended the opening of youth camp. “I hope Manokwari youngsters could have active role to take action to protect environment after the activity here,” said Novi.

Youth camp is intended to call young people of Manokwari to be sensitive to ecological issues, train the youth to analyze problem, plan an action plan, and build youth network in Manokwari for forest and sea protection. In this case, youth active role should be prepared earlier. Various government policies for public improvement and welfare at a certain region requires young generation as they are the owner and contender of a future leader.

In the youth camp, the participants were called to observe the closes issue to their lives. Waste is the major problem in Manokwari today. Without proper handling, waste problem will become a time bomb. Besides, deforestation, illegal logging, and coral destruction are also deemed serious threats to Manokwari.

Youth experiences were written on paper and sticked on a wall as experiences sharing. They were called to be the spearhead of sustainable ecology campaign. This could be done through waste cleanup on their surroundings, preventive and preemptive actions against deforestation, encroachment, illegal logging in Tanah Papua.

The youth wanted to get new experiences by building sensitiveness on ecological issues while broadening insight and building networks with many other local youths in Manokwari. “As young people we are equipped by ways to see ecological crisis and how to cope with positive role by observing and analyzing the existing environmental issues,” said Jaenal Arifin Rumbino, a youth camp participant.

Manokwari young people has role as an agent of change which is expectedly to make a better environment with their roles for being a game changer through their knowledge, idea, and skills. As the driver of change and object of change, youth should bravely address the truth without lie.

“Youth should always articulate social justice so all public aspirations for social justice which is formerly unseen and untouched could exist in justice. All is for a sustainable environment of Manokwari,” said another participant, Karel Alfando Yembise.

On the last day, they made action plans for the next few months. They also took action at the surrounding Lemon Island led by Pasifilionira Sawaki, a green and woman activist and facilitator.

“Starting something should be from ourselves to provide example to others. Keep in mind that what we are doing for earth is for the next generation so they could feel the same or even better than ours now,” said Pasifilionira.

Benoni Thomas Raubaba, one of the participants and Head of PAM of Lemon Island, on his action plan proposed a wider scope of action. “The location is not only for the church, but also mosque for the real action,” said Benoni.

On the concluding activity, the youngsters were inaugurated as EcoDefender. They pledged to be more sensitive to environmental issue and willing to defend the environment. The inauguration was attended by EcoNusa staff in Manokwari, PELAMPAR, EcoDefender, and Legislator Yan Anton Yoteni who also chairs the KAWAL (Wondama Young Green Activist Community) in West Papua. Yan called them to plant bamboo trees surrounding the camping ground.

“Bamboo is the symbol of KAWAL because bamboo could resist during the flood in Wasior. It signifies that KAWAL will be as strong as bamboo and will firmly continue defending environment in West Papua,” said Yan. 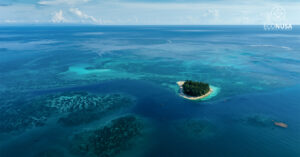 Pondering The Rain in June 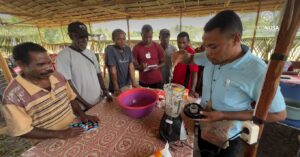