“Voices of the millennials and Z generations are the shares to explore, their political affiliations and figures to optimize their votes for a potential leader in the 2024 General Election,” said Sumardi “Aree” Ariansyah, EcoNusa’s Youth Engagement and Mobilization.

Young people filling the 60 percent of votes potentials in the general election could turn to be key for a better ecology and democracy. Learning from the presidential and vice presidential election in 2019, politics that are based on identity, culture, or certain background were so strongly controlling the campaign that the substance of work plans were out of discussion.

Read also: I am Digital, therefore I Exist

“This is a degrading democracy in which we are all overwhelmed by identity politics with sectarian issue as the top highlight rather than work plan proposed by the regional or national leader candidates and political party,” said Aree.

So, what is the relationship of ecology and politics and democracy? As to the National Disaster Management Agency (BNPB), there were 9,375 disasters happened in Indonesia in 2019. Forests fire was one of the most frequent disasters with 3,276 incidents in 2019 causing Rp75 trillion in loses.

“Such loses came from one of them. What about the total of loses from the entire disasters in 2019? Of course, the loses suffered by Indonesia were so huge,” said Aree.

As to him, the happening natural disaster is closely related to the public policy. The policy makers are in the legislative body whose members were elected from general election. Similarly, the executive body that executes policy was also elected from general election and we were the voters on the election. In reality, youth involvement in politics is still at minimum level, and even they prefer to become nonvoters. The percentage of abstainers in the 2019 General Election was quite high, or around 22.5 percent.

“All of us dream about Indonesia which is free from corruption, many job vacancies, healthy environment, accessible health facility, and affordable staple food. All should start from general election for a future change, which is expected to come from millennial and Z generations who have potentials voters and they should actively take parts in the 2024 General Election,” he said.

To date, as to Aree, the earth condition is worsened by climate crisis. Preventing it from worse is, among others, by active involvement in politics in search of the national or regional leaders candidates who side with ecological issue. Minimizing campaign on the sectarian issue basis, optimizing campaign on work plan ideas from political party or leader candidates, and prioritizing environmental protection from worse climate crisis are the major points to do.

“Being apathetic against politics is an option. But, it does not mean we opt for being a loser and led by an exploiter. Let us create the New Dream for 2024,” he said. 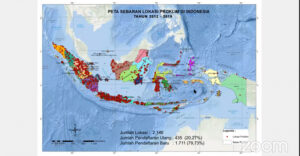 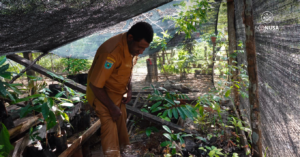