Warning alarm of the earth condition has rung more loudly. Climate change phrase is no longer suitable to illustrate various “weird” phenomena occurred some times in the past. Uncontrollable global warming makes the mankind’s longer live on earth in the future is questionable.

Despite the worsening fact, it is not too late to mitigate climate crisis. Young people play major roles as the driver of community lifestyle transformation while promoting government policy which mainstreams environmental sustainability.

“The situation (of climate crisis) has got so worse. Whatever we do will surely help, but there should be change of policy. We need policy change. Climate crisis keeps going even if we reside in a cave,” said Melissa Kowara, Indonesian Coordinator of national Extinction Rebellion (XR), on a virtual discussion entitled “All Eyes on Me, When I am Talking About” East Indonesia & Its Role to Mitigate The Climate Change” on Saturday, 24 July 2021.

A scientists report from the Intergovernmental Panel for Climate Change (IPCC) shows that greenhouse gas emission that makes earth getting warmer will exceed the agreed temperature limit within 10 years. On the Conference of Parties (COP) 21 in Paris in 2015, 195 countries agreed to keep earth temperature below 2 Celsius degree and even keep it up to 1.5 Celsius degree. The deal was then known as the Paris Agreement.

If earth temperature rises above 2 Celsius degree higher than that of the pre-industry era, sea surface will rise up to 4 meters. Archipelagic country like Indonesia with its 71 percent of water areas is on hazardous situation if global warming is getting more uncontrollable. Indonesian coastal areas will be submerged with following impacts such as drought, crop failure, natural disasters up to the extinction of many kinds of species.

However, the rising sea temperature affected by global warming  made the tropical cyclone Seroja hit Kupang producing extreme weather with typhoon, massive flooding and high tides in some regions in NTT. As a result, the disaster claimed 181 lives, 47 lost, 16,124 houses severely damaged and displaced 49,512 locals.

Indonesia has given its contribution to the climate crisis. According to Melissa, one of the examples deals with greenhouse gas emission due to degradation of forests and land ecosystem and energy sector in 2008-2018. “This climate crisis is major problem. This sector needs government policy,” she said.

On the other hand, EcoNusa CEO Bustar Maitar said it is necessary to have massive collaboration to mitigate climate crisis. Bustar appreciated Blackpink girl group’s call as the COP 26 ambassador to immediately take action to mitigate climate crisis. COP 26 will be held in Glasgow, Scotlandia, in October-November 2021. He said Blink that serves as the tool for Blackpink fans in Indonesia is expectedly to become the pioneer of various actions and mitigations for climate crisis.

“It is delightful (to know) that Blackpink is a group of youngsters representing the future. They decided to campaign our live from extinction. Blink fellows in Indonesia could become the pioneers of all fans clubs around the globe to spearhead the climate crisis campaign,” Bustar said.

Bustar mentioned that forests protection in Maluku Island and Tanah Papua is one of attempts to mitigate climate crisis. Both regions have 50 percent of the last forests in Indonesia. Based on land cover data of the Ministry of Environment and Forestry (MoEF) in 2019, those regions have 7,145 Gigatons of carbon stock. “This is our last frontier. The remaining forests are in Papua and Maluku. Beautiful sea with abundant fish are in the eastern parts of Indonesia. This is the most remote areas. Remote areas are commonly out of sight. Therefore, we should protect them,” he said. Together we can mitigate climate crisis! 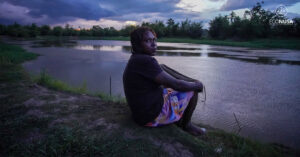