Kaimana in West Papua is not merely known as the beauty of its dusk and sunset. Kaimana is also dubbed with the kingdom of fish. Exploration done by the Conservation International Indonesia showed that there are 937 fish species and 492 types of corals in Kaimana waters. Kaimana is covered by thousands of mangrove forests that make the region the largest mangrove-covered in Indonesia. The landscape has bestowed livelihood for the surrounding community depending their lives on fishery commodities. However, the large potential of fisheries in Kaimana, West Papua, goes also along with the jeopardy that threatens the fish kingdom here.

On the Expert Talk School of Diplomacy (SED) Basic Class of the 6th series on May 29, 2021, at Tanjung Simora, Kaimana, West Papua, Corrich Corputty, representative of Kaimana Regency’s Culture and Tourism Office, said that the menaces to coastal and ocean ecosystem in Kaimana currently concern with human activities and nature factors. The menace is caused by human behavior and activity such as careless littering, mangrove logging, overfishing and unfriendly development. besides, natural disaster and global warming also worsen the damage of coastal and ocean ecosystems such as estuaries, mangrove, seagrass, coral reef, beach sand and small islands.

“Now the problem is how to sustain the kingdom of fish in Kaimana? Putting up with such threats, young people in Kaimana should have 4 things concerning with their local natural resources, that is that you are the owners, defenders, managers and finally the beneficiaries. Thus, there should be an understanding that human and nature relation is like a marriage that requires loyalty and responsibility,” said Corrich to the youngsters participating in SED Kaimana.

Expert Talk SED Kaimana was an opening session of the SED training series held by EcoNusa from May 29 to June 2, 2021 as instruments to produce young environmental diplomat. On the session, the competent resource persons elaborated the materials and discussed environmental issues related to the conservation of ocean ecosystem fisheries potential in Kaimana to the participants.

Eli Alue, Kaimana Regency’s head for regional government technical management unit (UPTD) for Kaimana – Fakfak Conservation Area Management, said in the session that Kaimana has four water conservation areas, namely Buruway, Teluk Arguni, Teluk Etna and Kaimana water. To safeguard the ecosystem of conservation areas, the regional government does not work alone. “We patrol regularly by involving the community to be responsible for watching their water to minimize the existing threats, mainly from human activity. Our team performs the coordination,” said Eli.

Muhammad Ridwan Putra, the Conservation International’s Fishery Program staff, underlined that the existence of shark could serve as an indicator for healthy water. “If there is no shark, it is possibly the water is unhealthy,” said Muhammad. As to him, water conservation does not merely protect, but also get sustainable benefit. “Sustainable fishery means that today and tomorrow I can eat,” he added.

Eli said that the ongoing fishing activities in Namatota, Kaimana, continue to happen. If it goes without sustainable fishery strategy, Eli worried if depleted fish stock will affect the sustainability of the existing whale shark population. “Namatota is conservation area. But there are large numbers of bagan (floating fish net in open sea) despite the small size of the region. This threatens the sustainability of whale shark here. In a month, we could patrol twice or three times jointly with Conservation International. We have communicated with the community on zoning system. The community must not catch fish on the core zone because the zone is deemed the deposit and balancer,” said Eli regretting the fact that there are many community activities on the core zone. 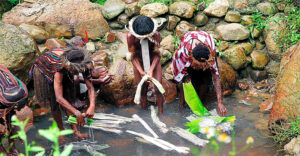 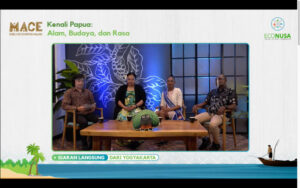 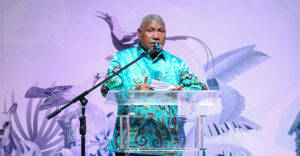