The Research Center for Oceanography Indonesia Institute of Sciences (P2O LIPI) revealed that there were 13 locations on Indonesian coastal area that were found microplastic such as Aceh, Bintan, South Sumatra (Musi River Estuary), Jakarta Bay, Semarang, Lombok, Banjarmasin, Manado, Makassar, Bitung, North Minahasa, Biak and Wakatobi. Most of the microplastic was found on South Sulawesi waters and Jakarta Bay. Microplastic was found on the surface of the water, sediment and inside of anchovy body (Stolephorus sp).

LIPI’s study conducted early last year, showed the number to be between 100.000 and 400.000 tons per year. However, this proves that plastic waste as the source of microplastics is still floating freely in the ocean.

Plastic is a very durable material that can be degraded by thermal oxidation with ultraviolet radiation and/or mechanically to smaller sizes. Degraded plastic with size less than 5 mm is referred to as microplastic. Marine debris found in this study dominated by disposable plastic packaging, rubber, metal, glass, wood (processed), cloth, and other hazardous materials (cited from thejakartapost.com).

P2O LIPI marine scientist Reza Cordova said plastic waste is the biggest challenge for our environment. “In the past year, our perception about waste only because of an aesthetic problem. But now waste had become the biggest threat for our environment,” said Reza in CTI Expose Coremap Ancol, Jakarta, December 2018.

Reza explained recently that up to 89 percent of anchovies, fished in Indonesian waters, have been contaminated by microplastic, with up to 1.5 particles being found in every gram of anchovies.

This indicates that all marine biota in Indonesian waters had ingested the particles as well. Microplastics refer to particles ranging from 5 millimeters to 100 nanometers in diameter. Microplastics usually come from the fragments of larger plastic items that have broken down in the natural environment.

Reza said amount of waste in the ocean can be caused by population density and bad waste management. “A large number of residents in the country still threw their domestic waste, which also contains plastic, into rivers,” told Reza. For information, Indonesia was known as the second biggest marine polluter in the world, after China, for channeling around 1.29 million tons of plastic waste into the ocean per year (Study led by Jenna Jambeck from the University of Georgia on 2016).

Let's protect the habitat of Birds-of-Paradise!​
Join with Us!
Related Posts
Special regional regulation on Sustainable Development for the Welfare of the Papuan People
The future of Indonesia’s seas in a portrait of the life of traditional fishermen
Water Pumpkin, Unique Plant Maker Koteka 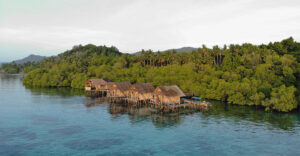