Youth movement will get a momentum along with the rising number of population due to demographic bonus. On the 100th anniversary of Indonesia, the productive age population percentage grows around 65 percent as of the total estimated population of 381.96 million. This is very benefiting  because young people could be mobilized to mitigate climate crisis.

Academician of the Stiper Agriculture Institute (Instiper), Agus Setyarso, said that the youth’s broad networks could help streamline the discourse and knowledge on climate crisis. The use of social media among young people might make it faster to happen.

“The largest millennial’s potential is that they have large number of followers, is it is the case of Greta Thurnberg. Her action affected 14 million people in 7,500 cities around the globe,” said Agus in the online and offline National Seminar of Sylva Indonesia 2022 entitled “G20 Presidency” on Monday 18 July 2022.

The success of various strategic measures to mitigate climate crisis depends on the collaboration among stakeholders. As to Agus, if the climate mitigation program fails to lure supporters and runs partially, then the set various objectives will be to no avail.

One of the climate crisis mitigation program proposed by the government is FOLU (Forest and Other Land Use) Net Sink. The government targeted forest and land sectors to sequester larger amount of carbon than the released carbon in 2030. In other word, the target of greenhouse gas emission reduction is 140 million tons  CO2e in 2030. Forestry sector has the biggest role with 60 percent of emission reduction here.

As to Agus, the youth involvement to meet the greenhouse gas emission reduction is badly needed. Without youth participation, it would be hard to meet the mitigation action in forestry sector such as deforestation stop and peatland restoration, sustainable forest management, and unproductive land optimization. “The FOLU Net Sink will fail without having millions of followers,” he said.

Similarly to Agus, EcoNusa CEO Bustar Maitar mentioned that the involvement of forestry students in the Sylva Indonesia will give significant impact to climate crisis mitigation. Assuming that there are 48 administrators of Sylva Indonesia chapters, at least there are 24 thousand students who have more concern with Indonesian forests.

“If 24 thousands of students here could not be mobilized for making a sustainable forest, do we have to stop as being university students? This is very crucial. Without forests, never have a hope that forestry students could get a job,” said Bustar.

As to Bustar, forests in the eastern Indonesia are the last hope for sustainable forests. If the deforestation in Maluku Island and Tanah Papua continues to happen, he worried if climate change could hardly be halted. The government endeavors to meet the Paris Agreement as seen in the Nationally Determined Contribution (NDC) becomes irrelevant.

Read also: Exigency of Youth Mobilization to Save Our Ocean

“There will be presidential and vice presidential election in the next two years. the students have strong position in relation with the future of Indonesia. Will the new leader talk about FOLU Net Sink? If the students fail to discuss the issue today, it is no avail. It will never change,” said Bustar.

As an information, Sylva Indonesia is the Indonesian forestry students association established in 1959. Up to now, there are 48 chapters administrators and 10 regional administrators in 48 universities across Indonesia. 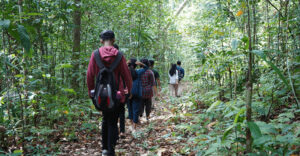 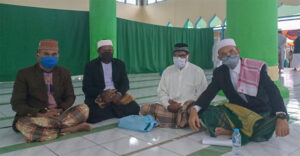