Youth involvement to climate crisis issue could hardly be overlooked. Earth destruction will speed up the climate crisis unless there is strong call from youngsters for change. Let alone, as an archipelagic country with thousands of islands, Indonesia is also under serious threat.

This is the key message in the virtual discussion entitled “Save Coastal Areas, Save Our Earth” in commemoration of the Earth Day organized by Jaring Nusa on Friday, 22 April 2022. “Because we are youngsters who will dwell on the earth up through years ahead, so we have to move as the friends of earth,” said Nurul Habaib Al Mukarramah, a member of Green Youth Movement.

Nurul said there are many more youngsters who concern with the climate crisis. The survey of Politic Indicator and Indonesia Cerah Foundation showed that 82 percent of respondents has serious concerns with climate crisis issue. Those respondents were of 17-35 years of age across Indonesia.

Survey from the Group of Indonesian Public Opinion and Discussion in 2021 depicted similar picture. Phone interview with 1,200 respondents of 14-40 years of age showed that 77.4 percent of Indonesian youngsters was keen on environmental issue. Meanwhile, 81.1 percent of respondents thinks that climate crisis is in urgent situation.

In a wider scope, the United Nations Development Programme (UNDP) held perceptive survey on climate crisis in 50 countries with 1.22 million respondents. The survey showed that 70 percent of respondents under 18 years old conceded that climate crisis is in emergency condition. They also realize that the government has major role to mitigate the climate crisis.

“The report of IPCC (Intergovernmental Panel for Climate Change) mentioned that global warming does not only reach 1.5 Celsius degree, but it may go far beyond. Many countries’ commitments would not be enough to curb the global warming,” said Nurul.

IPCC report released in February 2022 particularly underlined the impact of climate crisis that will happen to Indonesia. The impact will affect ecosystem, biodiversity, and humans. Besides, as country with the second longest coastline in the world with more than 17,000 islands, Indonesia is very vulnerable to climate crisis.

IPCC assumed that Indonesia will be slowly submerged due to erosion. The condition here will affect around 20 million peoples living on coastal and small island areas with the lingering tidal inundation. Then, the sea intrusion will leak into agriculture areas which leads to crop failure.

Indonesia Sea Conservation Foundation (YKL) Director, Nirwan Dessibali, said that public living in the coastal and small island areas is very vulnerable. The climate crisis threats do not merely increase the sea surface, but the community will also cope with the phenomena of small islet submersion, abrasion, economic resource loss, up to food security.

“The rising sea surface has happened anywhere. The coastal and small island communities are getting more vulnerable. Reclamation policy to curb such threats would not stop climate crisis,” said Nirwan.

Based on the study conducted by the Agency for the Assessment and Application of Technology (BPPT) in 2009, the rising sea level on the southern of Makassar was 42.09 centimeters. A year later it rose into 69.4 centimeters. Then, the sea level rise will keep happening up through to 88.16 centimeters in 2025 and 1.4 meters in 2100.

As to Nurul, the youth engagement to articulate climate crisis could be done in many ways, such as independent research to widen climate crisis insight and advocate this issue by using social media. With Walhi and EcoNusa, Green Youth Movement conducted a research on the climate crisis impact to the community in Bontosua Island, Pangkep Regency, in North Sulawesi Province.

Flooding in Bontosua Island happened due to the rising sea level and high downfall in January-February. The government and community constructed wave breaker surrounding the island as the mitigation measure. In addition to flood, the community also puts up with abrasion. The unpredictable weather has become challenges to the fishers of Bontosua Island.

“We focus on coastal community aspiration by dancing, sea campaign, theatre, and climate crisis. In the Sail to Campus, we build an education on the danger of plastic waste and climate crisis. We also conducted flyover with various demands such as forest restoration in South Sulawesi,” said Nurul. 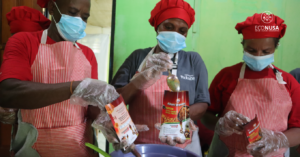 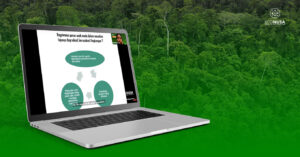 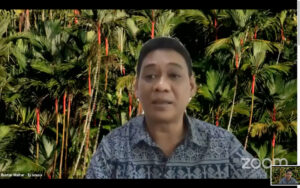