The culinary potential in Indonesia is very high. The reason is, there are more than 700 ethnic groups spread across the archipelago, each of which has a unique culinary dish or how to eat it. Indirectly, there is indigenous culture and wisdom contained in every taste in each region.

Making culinary as one of the weapons in introducing the culture and branding of a country commonly known as Gastrodiplomacy, which comes from the word gastronomy or Upaboga and Diplomacy.

Gastrodiplomacy was the theme of regular discussions on the Environment and Society of Papua (the Papua Circle) held by the EcoNusa Indonesia Foundation. Located at the Indonesian Workers’ Foundation Ballroom, Thursday (11/29/2018), Gastrodiplomacy was introduced by Jungle Chef Charles Toto, who had traveled the world even to foreign countries introducing authentic Papuan cuisine.

“Don’t want us to lose to Thailand. Their gastrodiplomacy is good, people call Tomyam definitely directly associated with Thailand. In us, with 700 tribes and each food should be even richer. So far, rendang food is only known as Padang, it has not yet become Indonesia, “he explained in the middle of a cooking demonstration conducted as part of the Papua Circle Discussion.

Utilizing culinary as one of the attractions should be a weapon of Indonesia, considering that the archipelago is a home of various tribes and each tribe has its own type of culinary. Therefore, increasing the knowledge and love of local food is an obligation of all Indonesian citizens.

“Let’s learn our true self, so people know how the tastes that come from our region, introduce how our traditional foods are healthier and more cultured than foreign foods that enter Indonesia,” Charles said.

“If sago starts to shift, we ask for sago to be planted, then plants that become food ingredients as well, we educate the community to return to our original identity,” he added.

On this occasion, Charles specifically made dishes from wax eggs, with gedi leaves. In particular, he brought black salt which is an original product from the Kombai and Korowai people who process it from leaves, because the tribal area is far from the sea.

“And this salt is specifically curated in Paris as a friendly salt for people with hypertension. So you can see how many healthy food sources come from our nature, “Charles concluded. 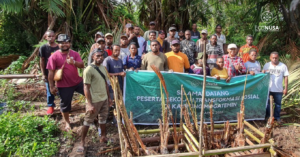 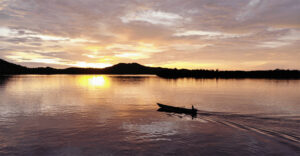