Greenhouse gas emission reduction and adaptation measures to cope with climate change is deemed a synergy of policy government and public participation. Climate change as the consequence of global warming could hardly be partially tackled. Comprehension and direct involvement serve as the key to deal with climate change, particularly for vulnerable groups such as indigenous community and peoples living in coastal areas and islets.

Ministry of Environment and Forestry (MoEF)’s Director for Climate Change Adaptation, Sri Tantri Arundhati, said that Climate Village Program known as Proklim is managed by MoEF promoting partnership principles with community. Proklim runs in small-scale administrative areas such as neighborhood unit, village or at village level that have made climate change adaptation and mitigation efforts in sustainable manner.

“Proklim aims to educate community on what can be done to survive from climate change while helping government reduce climate change effect,” said Sri in an online discussion on “Building Climate Village Program in the Land of Papua” organized by EcoNusa Foundation on April 23, 2020.

Before registering as Proklim area, climate change adaptation and mitigation activities should had been run for two years. Besides, community group that support this action has been established and got sustainable institutional supports. “We do not want it to be simply a project. We want Proklim as a sustainable program,” Sri said.

Since 2012 up to now, there have been 2,146 climate village nationwide. The figures cover 248 sub-districts in 29 provinces. Proklims mostly exist in Sumatera and Java Islands. But there are only 21 Proklim in the Land of Papua with the largest primary forests and biodiversity.

INTSIA Foundation Program Manager, Yoseph Watopa, said that the component of Proklim is similar with the culture and lifestyle of indigenous community in the Land of Papua. As to Yoseph, the indigenous community has been advanced in applying climate change adaptation and mitigation  long before national registration system of climate change control.

Yoseph gave example of practices done by the indigenous community in Mamberamo Regency, Papua. Concerning with adaptation to drought, he said that the indigenous community had rule that bans tree cutting surrounding the source of water. It happens in Kwerba, Marinavalen and Marumare Villages. To sustain food security, the community makes multiculturism cultivation by planting banana, cocoa, cassava and areca nut.

In addition, the local community also applies organic agriculture as part of mitigation process. Karema and Benuki Villages even replant the former mining areas by planting organic cocoa. “There are short of socialization of Proklim. But the indigenous communities have applied climate change adaptation and mitigation. Therefore, those activities should be organized and made them as the village program,” said Yoseph.

The research entitling “Climate Change Threatens New Guinea’s Biocultural Heritage” predicts the possible loss of the Land of Papua due to climate change. The research published by Science Advance in November 2019 uses modeling data up to 2070. The researchers predict the extinction of 94 endemic flora species from each language cluster from 1,030 language cluster in New Guinea Island.

Charlie D. Heatubun, one of the researchers, said that there are 14 areas that should get priority protection from climate change. Without protection, the extinction of endemic vegetation will also make local language words disappear.

“When the worst scenario comes up and we fail to anticipate it properly, many of our vegetation species will extinct. At that point, local knowledge, local attribution will also be extinct,” said Charlie who is the Head of West Papua Province’s Research and Development Agency (Balitbangda). 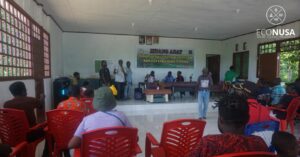 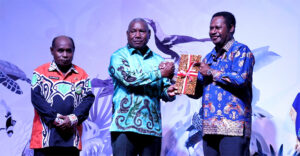