The vision of development and development of an area emanates from the Spatial Planning and the Area (RTRW) that was formed as a guide for the utilization of the area. For areas with abundant natural resources, the RTRW prepared so far has allocated a lot of their territory to be exploited. The reason is that the region can be a source of regional income.

This condition also initially occurred in West Papua Province. In the 2013-2033 RTRW, 36% of the West Papua region is targeted as a conservation area, while the Other Use Areas (APL) reach 64%.

“With the new district expansion in West Papua, we need to review the needs of the existing area, so we need to re-adjust these areas to be designated, which is for management, protection, conservation and so on. So that when this RTRW is ratified in the future we will wake up by referring to the RTRW, so that we are not awake, if we wake up wrong, we will be wrong in its planning, “said West Papua Governor Dominggus Mandacan in the opening of the International Conference on Biodiversity, Ecotourism and the Economy Creative, in the West Papua Governor’s Office Complex, Manokwari, Sunday (07/10).

In the Plenary Session, Dominggus explained in more detail the plan. He hopes that the revision of the West Papua RTRW can be one way the Province can contribute in reducing national carbon emissions and biodiversity conservation.

“We will design a sago forest as an ecosystem area that needs to be preserved by the people of Papua. Specifically for spatial planning, we propose to include the area of indigenous peoples’ management in the structure and program of the RTRW of West Papua Province in accordance with the spirit of West Papua’s special autonomy which prioritizes the concept of recognition and protection of indigenous Papuan rights, “he explained.

Previously, Head of West Papua Province Research and Development Agency Charlie Heatubun on a separate occasion stated the intention of revising the RTRW like to fence off the home page. According to him, with the fencing, the area boundaries that can be used as APL will be clearly visible.

“If not from now on (fencing), of course there will be a lot of permits, which we know is the matter in the Central Government. That way, the initiatives that we have announced will not work, “he said.

Regarding permits, Charlie said that most of the Land of Papua had been evaluated for mining and oil palm allocations. For agriculture, he said there were 42 permits.

“Therefore, one of our targets at ICBE is to review licenses, especially those related to palm oil,” he continued.

Indeed, Papuans can always exploit their nature without destroying forests. Because, all their needs can always be found in the forest.

Therefore, one of the schemes that must be developed is Non-Timber Forest Products (NTFPs) together with the utilization of forest ecosystems that can produce in tourism economic activities. 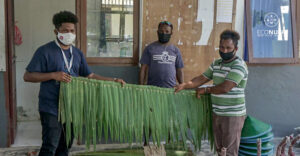 “This kind of activity has never existed in East Arefi Village” 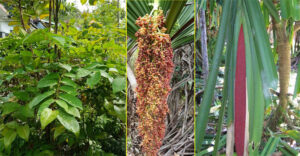 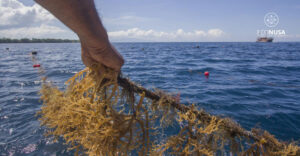