Environment always provides sources of inspiration for creative process of Slank music group. From the release of its preliminary album entitled Suit… Suit… He… He… (Gadis Sexy) in 1990, Slank has composed philosophical contemplation of life through a song entitled Karang (reef). The song tells a story of regretful person who wants to retrieve the past.

Similarly happens to the last album, Palalopeyank (2017). Slank with straight lyrics speaks up the dismay and anger against natural devastation through its song entitled Hutan Karma (Karma Forest). The song was born when Slank traveled to Pekanbaru in Riau Province. Having landed in the city, Slank inhaled the thick haze of forests fires.

“Forest should be prioritized in development. The worst scenario is that forest only serves as a wallpaper. Development is inevitable. But we actually could afford ecofriendly development,” said Kaka, Slank lead vocalist.

Slank’s bass player, Ivanka, said that the environmental condition in Indonesia, particularly forest, has currently been in the saddened state. Economic activities in the forest has given adverse impacts to the surrounding ecosystem. Ivanka referred to the degrading habitat of orangutan in Sumatera and Kalimantan due to logging and mining.

Indonesian forests have vital roles. They are the dwellings of millions of flora and fauna. They keep the rising earth temperature due to global warming, safeguard the cycle with photosynthetic process and buffer from erosion. Besides, forest also serves as the important spot for the indigenous communities livelihood.

Kaka hoped that industrial expansion in the eastern Indonesia will not degrade the forests as it happens in the central and western parts of Indonesia. “(Forests in eastern Indonesia) has become the last frontier. Forest should exist despite the massive development in Tanah Papua. When the regions in Tanah Papua have new leaders, they should have had concern with forests. They are the last frontiers after all,” Kaka said.

Meanwhile, Slank guitar player, Ridho Hafiedz, optimistically said that Indonesian forests will be well-maintained. As to him, the roles of indigenous peoples to keep their forests through local wisdom have become the living evidences for hundreds of years. “For the reason, we should protect indigenous community, let alone during the current pandemic. It is the local indigenous community that has one of the major roles to protect forest,” said Ridho. 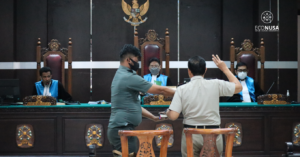