For peoples in Tanah Papua, sago has important meaning which is beyond the source of food. Sago is like a mother who suffices the needs and gives life. At least, sago forest has four major benefits to the life of Papuan peoples as it serves as the source of clothing, dwelling, food and ecosystem.

The philosophy of sago has strong bonds linked to all aspects of life and culture of Papuan peoples. All parts of sago tree have benefits for life. The sago trunk produces sago powder, the leaves are utilized as roof and wall. Even the pests, sago magot, are edibles.

Hans Tokoro, the Tribal Chief of Yoboi Village in Sentani District, nearby Sentani Lake, in Jayapura Regency, said that sago forest is an inseparable element to the indigenous community life at Yoboi Village. Sago is deemed priceless vegetation both economically and traditionally speaking. “From the sago forest here, we could have good yields. Sago is tradable or taken anywhere (for traditional barter). If sold, it generates money. When it is brought to female or male relatives, traditionally we can get beads or stone tomako,” Hans said.

In local tradition of Sentani, stone tomako is considered traditional tool such as stone-made axe used for producing sago. The stone tomako serves as payment tool or dowry such as beads.

Hans said that today nearly all of the communities in Yoboi get benefits from selling sago. They could spend the earning to meet their daily needs and children’s school tuition. Not only for trading, but all elements of sago tree could also  be utilized for various kinds of use. “ From the sago tree, we could construct a house, for flooring. Sago leaves are utilized for roof and wall. So, sago is very useful to the life of our community,” he said.

In addition to Hans, a notable chef who is good at Papuan native food, Charles Toto, said that sago tree could also suffice the Papuan need for food as the source of carbohydrate and protein. Carbohydrate is sourced from sago powder from the trunk. The protein comes from sago magot as the sago pest. Despite the seemingly extreme, sago magot tastes good and can be cooked in many different ways such as sauté or grilled.

The major contribution of sago to the peoples’ life has driven the local government to develop sago since 2007. The development includes the spatial planning of sago villages, sago tree distancing, sago replanting to sustain the population and sago blocking. The classification includes production block as the sago block for the peoples’ benefits. Collection block is for the development of prominent sago types and sago forests. The statement was made by Karel M. Yarangga, Papua’s Plantation Section Head of the Agriculture and Food Office.

“Sago improves food security and community economy. When it is well-combined with tourism and well-governed, sago forest could provide added value and become a tourism object,” said Karel.

The outstanding potentials of Yoboi supported by the existing sago forest and Sentani Lake inspired Billy Tokoro, a youngster of Yoboi. Billy chairs Tourism Group (Pokdarwis) of Yoboi and initiated the Sago Magot Festival for the first time at Yoboi in November 2020.

He asked for a permit to the tribal chief to organize the festival. He campaigned sago conservation and the importance of sago to the indigenous people. The festival was held to meet the public economic needs, particularly during the pandemic which caused a declining income of nearly all Yoboi communities.

“We have natural resources, sago, lake and the tribal chief has given permit for organizing the Festival of Sago Magot,” said Billy.

Sago magot is deemed pest of sago tree but it turns to be an icon of the three-day festival on 26-28 November 2020. In the festival which is supported by the Papua’s Forestry and Environment Office and Yoboi’s local authorities, the local community sold their local sago-made culinary such as ice cream and sago-made meatball. Some foods were made of sago magot such as sago pizza. They also sold various kinds of handicrafts made of sago leaves.

More than 3,000 visitors flocked the festival which was also supported by EcoNusa Foundation. Most visitors came from Jayapura City and Regency, Keerom Regency and even outside Papua. Despite the excitement, the event was held under strict health protocol.

“It is expected that the festival could motivate other people particularly young people (to conserve sago and lake). With sago we can survive. At Yoboi Village, people also depend their lives from sago,” said Billy.

Meanwhile, Jan Jap also added that the local government provides full support to the youngsters’ creativity at Yoboi to conserve sago forest through this festival.

“The festival event goes along with the local economy-based tourism management to improve the indigenous people empowerment and welfare. The main objective is to manage environment service management and optimize tourism potential which could boost up the community economy,” he said. 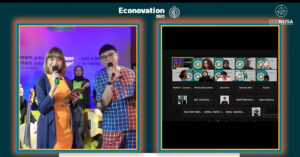 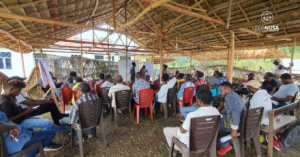 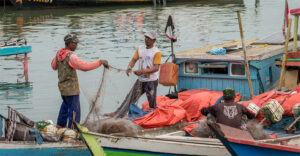