Fear lingered in the mind of people in Konda District, South Sorong Regency, West Papua Province. They were anxious to know the trial which charged the South Sorong Regent, Samsudin Anggiluli, indicted by palm oil companies. The litigation was registered in the Jayapura High Administrative Court from the last December 2021. The verdict will define the future of forests as the source of livelihood of the people in South Sorong.

The lawsuit against South Sorong Regency was filed by PT Anugrah Saksi Internusa (PT ASI) and PT Persada Utama Agromulia (PT PUA). Both companies expressed their objections to the license revocation done by South Sorong Regent, Samsudin Anggiluli, in Mai 2021. The lawsuit filed by PT PUA had  46/G/2021/PTUN.JPR and PT ASI with 45/G/2021/PTUN.JPR as the registered numbers. In addition to both companies, Samsudin also revoked the licenses of PT Internusa Jaya Sejahtera and PT Varia Mitra Andalan.

Samsudin Anggiluli was not alone. There are other 7 regents who revoked palm oil companies licenses. Since, 2018, the evaluation team of palm oil plantation has weighed up the licenses of 24 palm oil companies in West Papua. The team recommendation was then followed up by revoking the licenses covering a total of 351,342.93 hectares plots of land including that of possessed by PT ASI and PT PUA.

The license revocation has complied with the procedures of evaluation and data confirmation with the companies. PT ASI and PT PUA have not acquired Rights to Cultivate (HGU) and planted yet. Without HGU, there is no legal standing to change forests into palm oil plantation. Both companies failed to comply with the Plantation Business Permit.

Sopice remembered the first arrival of PT ASI to Konda District in 2013. As to Sopice, the representative of PT ASI met the village head, instead of the Konda communities. On the meeting, she said that the meeting failed to reach any deal nor agree to clear land for palm oil. “At the time, they only agreed that there would be meeting with five villages in Konda District to talk whether or not the locals agree with palm oil,” said Sopice. Those five villages here are Bariat, Konda, Manelek, Nagna, and Wamergege.

With the community left uninformed, PT ASI was back to South Sorong in 2015. Without naming the timeline, Sopice said that at the time commission trial and the technical team of Environmental Impact Analysis (AMDAL) were undertaken in favor of PT ASI operations in Konda and Teminabuan Districts. “The locals were boiled with rage and staged protests at the regent office so the court was cancelled,” she said.

The next meeting happened in Konda District in 2020. Sopice who served as the district head from 2016 to 18 February 2022 clearly remembered the incident. On a meeting with some other district heads, Sopice suggested PT ASI to have direct talk with the community. Despite her status as the district head, she did not have the rights to stand for the people’s customary rights.

In October 2020, PT ASI meeting with the community would have been held in the district office yard. Unfortunately, PT ASI arrival was rebuffed by the locals. “We kept the company and requested evident from the government. They gave a letter from the local government. That becomes the basis of local rejection letter as saying that the community had never made any deal to accept PT ASI and we wondered why the government issued the permit,” she added.

Sopice should have been one of the witnesses on the South Sorong Regent trial. However, she could not manage to come to court because she should undergo leadership training and education in Makassar. Her position was substituted by the Head of Teminabuan District, Frans Salmon Thesia.

Standing as witness, Frans acknowledged he had just known the existence of the company running its operation in his customary land following Samsudin Anggiluli revoked the licenses of PT ASI and PT PUA and the rejection of indigenous community in Teminabuan. As part of the local government and customary rights holder, Frans knew very well the customary land here.

“We have never known that there was release of customary land to the company because there has never been any notification. Whereas, I am the head of district and land owner in the region,” he said. He also rejected the evidence showing the local support as showed by the plaintiff’s lawyer. “There is always registered number of district correspondence, but there is no registered number,” said Frans.

Sopice expected the court conclusion would give positive result to the indigenous people. If the judges turned down the lawsuits, the community will feel secure. “This is because forest and customary land are deemed ‘mother’ to us. They are the giver of life to us. When our forest is secure, it means the Papuan people will be at ease. When forest is disturbed, it means their lives will not free from anxiety,” said Sopice. 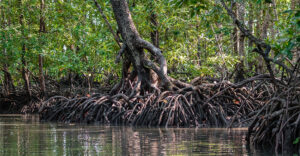 Mangrove in Kambala, Resource Rich but Lack of Utilization 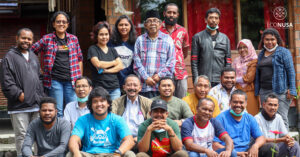