Faradila Dani, a participant from Rhun Island, said that single use waste, particularly baby diapers, could destroy sea ecosystem surrounding Rhun Island. As to Faradila, there are 135 babies living in Rhun Island. If a baby uses three different diapers a day, then there will be 405 used diapers within a day that are disposed to the sea.

“There are 405 single use diapers per day. In a month, there will be 12,150 used diapers and 145,800 used diapers as waste in one year. All wastes are disposed at the sea. They put the waste into a sack and drown it with stone to the sea. It will become a prolonging problem,” said Faradila during her action plan presentation.

According to Faradila, the used diapers will affect the quality of fish on Rhun Island water. Let alone, Rhun Island is reputable for the best supplier of salted skipjack fish in Maluku Province. Besides, the diaper wastes could potentially destroy coral reefs.

“The diaper gel could be processed into fertilizer. The plastic on the diaper is cut in small pieces to create a pillow. I have made this and use my kid’s used diaper. Currently I do not use single use diaper anymore,” said Faradila.

Improper waste management also happened in Aru Island. According to Steven Golorem, waste pollution has stockpiled and reached under the local house on stilts in which local people dwell. With Steven, Advento Delehoya Rahangmetan planned to deliver a socialisation on the hazard of improperly processed waste. Socialisation and waste clean-up are carried out by the community in collaboration with the local government.

“We will also cooperate with some communities focussing on green issues. But, it is also important to find a way that the community does not give up. Waste management should provide economic value to the locals so as to help earn their living,” said Advento.

Responding to the participants of Maluku Young Kewang, chairman of Haruku tradition kewang Eliza Marten Kissya reminded that an action plan for environmental conservation should start from ourselves. Besides, Eliza said that collaboration among stakeholders is one of the key successes of natural resources management.

“If we want to become a figure, a role model, all should start from ourselves. Never talk to people when our own yard is dirty. Make a good life with anyone. Make friend even with an enemy. Safeguarding Maluku environment should be commenced from young people. If we (as young people) start doing something, it will serve as a role model,” said Eliza. 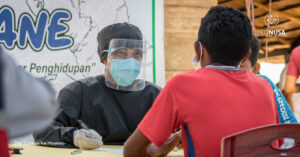 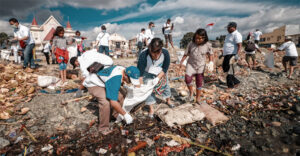 The Sea is Not a Trash