Land property system in Tanah Papua becomes a major factor for agriculture development. Unlike those of Java Island with land rental system by farmer, every clan in Tanah Papua has productive area for their cultivation.

The motivating words here was addressed by the Head of Sorong Regency’s Food, Horticulture, and Plantation, Frengki Wamafma, to local cadres and eleven village heads. They gathered on the opening of Village Head Workshop (WKK) and Sorong Social Transformation School (STS) in Tarsa Village, Konhir District, Sorong Regency in West Papua. The STS lasted for seven days on 24-30 June 2022.

“We do not know cultivator term. Upon having yield, we need not to share them as each clan has their own land. It depends on how we act,” said Frengki.

He reminded that learning agriculture will give positive impact to the community. The food autonomy will be established and give major impact to the family and village economies. Similarly, the need for nutrition for child development will be fulfiled.

Despite the trial process of the lawsuit on license revocation has yet to have permanent legal standing, the Sorong Regency’s Food, Horticulture, and Plantation Office has socialized the taro cultivation at Konhir District, Wemak, and Klawak as well as Segun District at Gisim and Waimon Villages for coconut cultivation.

The socialization process has been running and will be followed up by planting activities in the near future. “This year we will try to map the commodity areas and it is expectedly to garner data,” said Frengki.

In response, Konhir District Head, Petrus Syatfle, reckoned his readiness to implmeent the cultivation program proposed by Sorong Regency government. He welcomed the WKK and STS Sorong activities as they will build the capacity of the locals on agriculture.

WKK and STS are intended to build community resilience in 11 villages of 4 districts that are selected from scoping, namely Klafyo, Klarin, Tarsa, Klaflum, Klamne, Klafelem Villages in Konhir District; Klasman Village in Malabotom District; Kwari Village in Wemak District; Maladofok, Yorbes, and Samusa Villages in Sayosa District. In those two activities, the village head and cadres learned how to manage and utilize the existing sources of livelihood at their villages.

Petrus expected the community could take part in the WKK and STS implementations seriously. Konhir means collective belonging and collaborative act for development. the activity here was very crucial to build capacity. “If it is well applied, the crop will be satisfying to meet the domestic needs, sell it to market, and support the school tuition,” said Petrus.

Meanwhile, the Head of EcoNusa Sorong Office, F.X. Adi Saputra, said that the STS and WKK programs were not only intended to improve the local capacity in farming, but also the local governance upgrade including resources and existing potentials management at Konhir District.

As to Adi, the togetherness as said by the District Head was very important for the village development.  WKK is to ensure the commitment of the village heads, Village Assembly Body (Bamuskam), and local cadres to work together in the village. “We present them altogether to build the same perception. If the cadres walk alone, it will not work,” said Adi. 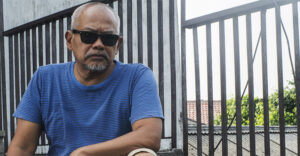 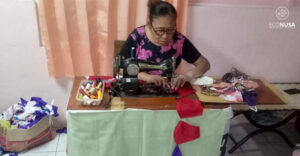 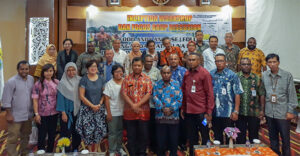