It has been two years since the PakaTiva Association has been assisting residents of Samo Village, North West Gane District, South Halmahera Regency, North Maluku Province. To reach this village you can use sea and land transportation. From Ternate Island requires 5 hours drive. It starts by crossing by speed boat to Sofifi, the capital of North Maluku Province, located on Halmahera Island. From here the journey continues by car. The travel time is quite long because of the road conditions that have not been smoothly paved. Some are still in the form of dirt roads. Therefore, if it rains heavily, the river overflows and the muddy roads are forced to continue by boat or motorcycle taxi. In addition, Samo Village can also be reached by ship three times a week and takes about 8 hours from Ternate.

Early in 2019, PakaTiva began the activity by building capacity building for citizens, while encouraging a number of small practices in the field. Mid-2019 by carrying out a program to strengthen the capacity of communities around the forest (forest community) supported by the EcoNusa Foundation, residents have begun to develop food crops and other productive businesses.

PakaTiva facilitates residents to provide food by developing gardens or idle land. The earliest step is to initiate the formation of a rice planting group and provide the seeds. The seeds provided are non-GMO (Genetically Modified Organism) organic local seeds taken from North Halmahera.

The choice to develop this paddy field through several considerations. First, residents have a long history of growing rice that has been left for almost 20 years. Second, based on a small survey from PakaTiva, it is shown that Samo Village, which has 166 heads of households (KK) with an area of 49.9 square kilometers, its citizens consume rice imported from Ternate. In one month each household consumes between 35 and 40 kilograms of rice.

“This is what underlies us to encourage citizens to prepare their food. Every month one family can spend IDR 350 thousand, even more to buy rice. Not to mention shopping for vegetables and other needs, a day of at least Rp10 thousand. On average, a month residents have to spend around Rp. 600 thousand to buy rice and vegetables. Even though they are farmers and have quite large land, “explained Faizal Ratuela, Director of the PakaTiva Association.

This means, according to Faizal, that the village’s rice expenditure in a month reaches Rp99 million. The amount is not small. Therefore, efforts must be made to change the mindset of citizens to return to farming to reduce spending on food. The goal is that the money from selling copra, cloves or nutmeg can be used for health expenses, children’s education or savings. “This movement is actually an effort to get people back to plant their land with food crops,” Faizal said.

Residents already have a tradition of growing rice from the past. In a year they plant rice twice. The first growing season is June-July, and the second planting season is March-April. The harvest will be their food stock for a year.

In addition, they also implemented a intercropping system with corn, locally called roka (intercropping). Roka commonly used is corn and beans. Corn was chosen because it can be used as a substitute before the rice harvest. Farmers can produce corn to meet carbohydrate needs in three months while waiting for the rice harvest.

Likewise, horticultural plants. Usually residents have land reserves with a size of about 25 × 50 meters to grow vegetables, onions, chillies, tomatoes and others. In this way, residents are always ready to meet their daily needs. They also have ready-to-eat rice which is traditionally pounded using mortar. Residents also have land to grow cassava, bananas and sago. Because basic needs are always available, residents rarely sell bananas, chillies or tomatoes. They just give each other enough.

“Previously in this village farmers only knew cloves, copra and nutmeg as a result of plantations that could be sold. The rest are not sold. This is proven because each resident has a coconut, clove or nutmeg and food garden, “said Rusli Hi Aba, a community leader in Samo Village. Now it’s turned. Most of the people left the habit of growing food crops. They are just waiting for the harvest of copra, cloves and nutmeg. Then the money is bought rice and other consumption materials.

What PakaTiva initiated was like a tit for tat. Residents immediately formed 6 groups to plant rice. The habit of working together to clean the garden is also re-activated. “We are very pleased that friends from NGOs have come to help us to remind us to plant,” said Hafel Hasyim, one of the farmers in Samo Village, who has now been planting rice that has been abandoned for decades. According to him, in the past almost every year they planted rice. Unfortunately, consumptive culture makes them accustomed to buying. Finally, rice was abandoned. Hafel himself besides planting rice also works on palm sugar which is now being done by his child. Hafel with his wife and son-in-law formed a group of palm sugar and planted paddy fields.

By planting rice they can save money on spending. No need to buy rice or vegetables because you just harvest in the garden. “Because I already planted rice, I no longer needed to buy rice. Usually to buy rice and other needs, we can spend up to Rp550 thousand a month, “said Muddin Hasyim, a farmer from Samo Village. According to Mudin, first nutmegs picked or collected from the fallen were sold and the money was used to buy rice. Not anymore, because hundreds of kilos of unhusked rice from his own land are ready to be processed into rice. “I can save money already. Nutmeg harvested is not necessary to buy rice, “he said. Muddin has twice planted rice on land measuring 50×50 meters. From this rice harvest, we have prepared rice to welcome the month of Ramadan. 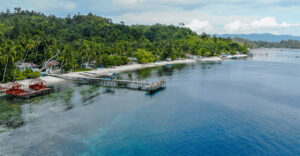 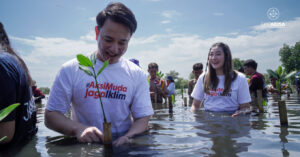