Making a dialogue and uniting with nature are deemed the source of inspiration for work. Nature has given tranquility and serenity in mind that could hardly exist at urban ambience that requires people to have fast moving pace. This is what happens to a musician like Rizki Rahmahadian Pamungkas. The popularly known Pamungkas admitted that nature has important role in his song composition creative process.

“I found that being in close unity with nature actually reminds me of what is the origin of human,” said Pamungkas on Sunday 17 October 2021.

Pamungkas was one of the performers on the Rockin’ Paradise Young Spirit organized by EcoNusa. Aired by YouTube EcoNusa TV on 23 October 2021, the concert called young peoples to defend forests particularly those existing in Tanah Papua and Maluku Island. The performance also featured Dira, Marcello Tahitoe, Nikita Becker, Vicky Salamor, and The Bakuucakar.

Upon composing his album Flying Solo (2019), Pamungkas, or dubbed Pam, pulled him back from the hustle and bustle of the capital city. He opted Bali Island as haven for him that provides serenity to work out his album. Pam explored forests and beaches in Bali and produced 11 songs in his third album on love, self-love, and loneliness.

As to Pam, on his intensive interaction with nature, particularly forests, he could no longer feel anxiety and negative thought. His feeling of being alienated went away in a moment. He considered that forests are not simply a collection of trees at a certain area, but rather a symbol of persistence.

“With the existing social media and rare interaction with other fellows, we then wonder how we could be alone. At such a moment, we actually need nature. So, stay close to nature. Let alone, the generation like mine. With nature, life will be more harmonious,” said Pam.

Unfortunately, sustainability of nature is aggravated. Development with its mere pursuit of economic growth stay away from nature. Forests as the habitat of million living creatures are deemed one of the lucrative businesses for economic growth.

Destruction of nature has continued to happen since the industry revolution and thus it results in climate crisis. Without control, the rising earth temperature will lead to extinction of millions of living creatures, including humans. “I am not an expert, but I think it is like a cause-and-effect law. In daily life, if you do not clean up your room, it will not make you comfy as there are much dust that causes ailment,” he said. 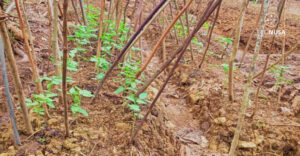 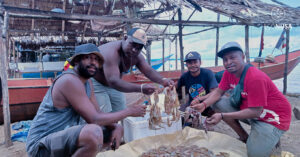