Indonesia’s largest tropical rainforest is in Tanah Papua and the Maluku Islands. More than 3,000 vertebrate and 200,000 invertebrate species live in this tropical rainforest area. They range from insects, reptiles, mammals to birds, including birds-of-paradise with their  well-known magnificence.

“Papua is an extraordinary land. Like what Edo Kondologit sang, Tanah Papua is a little paradise falling down to the earth. It is marked by the existence of birds-of-paradise (cenderawasih) living here. And these beautiful birds would not be able to live without plants,” Charlie said.

Regarding the interrelationship among species in the forest ecosystem, it is important to save Papua and the Maluku Islands rainforests. “The government is now facing a challenge to accelerate development in a bid to escalate the Papuan economy and welfare, while prioritizing provincial conservation initiatives and sustainable policies,” Charlie continued.

Why is it Important to Protect the Tropical Rainforests of Papua and Maluku?

The existing high level of biodiversity in Tanah Papua and the Maluku Islands is a sign of a healthy forest ecosystem. It means that these forests can serve their roles as earth’s climate stabilizer and provide life for living creatures.

Furthermore, the preservation efforts for rainforest both in Tanah Papua and the Maluku Islands should be done to protect the untapped potential  biological wealth. Charlie said, when compared to Indonesia’s neighboring countries, either Australia or Papua New Guinea, Indonesia still lacks data and research results of flora and fauna species in Tanah Papua and the Maluku Islands. To date, the recorded data on the number of species is only a small part of a huge amount of species that may exist in the wilderness of Papua and Maluku.

Tim Laman, a wildlife photographer and videographer who spent 8 years with ornithologist Ed Scholes documenting birds-of-paradise, also spoke up through the MACE Defending Paradise event. Laman said that one of the most important reasons for maintaining rainforest cover in Papua and Maluku is because of the potential for biological wealth in the depth of the forest, which may still be largely undiscovered.

“The discovery of the latest bird-of-paradise species, namely Vogelkop Superb Bird-of-Paradise or Lophorina niedda as one of the seven endemic birds-of-paradise in Tanah Papua a few years ago, has convinced us that there are still many unidentified animal and plant species in Papua’s rainforests. Unfortunately, when rainforests are lost, these species will also disappear before they are discovered. It will be a huge loss,” said Laman.

Responding to Laman, Ed Scholes said, despite natural forest cover ratio remainsl high, the forest loss in Papua and Maluku in the last 20 years has been clearly visible. “Every time I come back to Papua from year to year, I really see a lot of changes and forest loss due to land conversion,” said Scholes.

He added, in fact, half of the remaining intact tropical rainforests in the world are in New Guinea. Meanwhile, half of the intact forests in New Guinea are those existing in Tanah Papua and Maluku Islands in Indonesia, which serve as home to birds-of-paradise and hundreds of thousands flora and fauna species.

“Actually, protecting tropical rainforests in Indonesia, Tanah Papua is not only critical for the sustainability of the birds-of-paradise as a protected bird, but also because of the fact that these forests provide many benefits for humans. These forests provide water, clean air, food and a global service that absorbs carbon which has a tremendous impact on climate change,” said Scholes.

Threat and Protection of the Tropical Rainforests of Papua and Maluku

Currently tropical rainforests in Papua and Maluku Islands are facing  the biggest threats of land conversion to industrial areas and infrastructure development. There are more than 130 companies with oil palm plantation concessions and business permits for timber forest products in Tanah Papua. The total concession areas are ​​about 7 million hectares that spread over 20 districts or cities.

“Tanah Papua has been divided into lots by palm oil concessions and logging companies. If we look at the map, the area that is not affected by the concession is in the center part of the island because it is a mountainous area in which oil palm could hardly grow. In addition to concessions, the rainforests are also affected by infrastructure development, especially road construction. This is intended to open access for transportation to enhance the economy and for locals who live in remote areas,” said Charlie.

Charlie added, the impact of oil palm plantations and logging activities, infrastructure development and the food estate scheme have sacrificed rainforest cover in Papua and Maluku that increase forest destruction. For this reason, it is necessary to apply various environmentally friendly and wiser policies that are expected to reduce the impact of development and minimize the rate of forest loss. Because the forest loss will eventually lead the birds-of-paradise and other animals that need healthy forests as their habitat to have no place to live in this area.

“Since 2015, there has been growing awareness to take a sustainable development approach in West Papua. We keep doing the development in order to improve the quality of human resources and economic growth, but in a sensible manner using green economy. We encourage non-deforestation commodities and ecotourism as an economic driver while considering the protection of the existing biodiversity,” said Charlie.

EcoNusa dan Cornell Lab of Ornithology invites all of people in the world to voice a support for Papua and Maluku rainforest protection. These forest are home for birds-of-paradise and many other flora and fauna unique species. Write your support message through econusa.id/en/defendingparadise/dukung-defending-paradise/ and watch first episode of Defending Paradise video series. 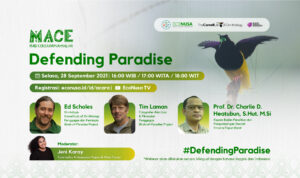 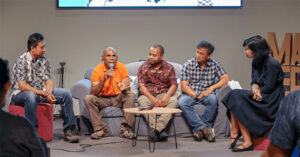 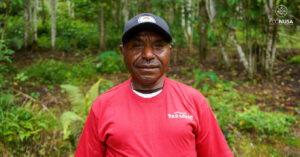