Home » EcoBlogs » Nutmeg Tale of Kaimana, from Nursery to Training on Shaky Nutmeg

Nutmeg Tale of Kaimana, from Nursery to Training on Shaky Nutmeg

Papuan nutmeg (Myristica argentea Warb) has high economic value. Indonesia is one of the largest producers and exporters of nutmeg and fuli (nutmeg seed coat) in the world with 75 percent of market shares in global market. The non-timber forest product also becomes one of the major commodities for peoples in Egarwara, Wermenu, Kufuryai, and Manggera Villages in Teluk Arguni Bawah District, Kaimana Regency, West Papua.

The local nutmeg plantations spread over the clan-owned forests located at the backside of the village and other small islands in Arguni Bawah District. In harvest time, men will go to the garden for days or even weeks to pick up nutmeg,” said Petrosina Tanggarofa, a local woman of Manggera, on Thursday 29 September 2022.

In spite of being the major commodity, the community has not managed nutmeg optimally ranging from planting up to post-crop management. Thus, the community tend to earn lower price from nutmeg. Since July 2021, EcoNusa has tried to promote the management of nutmeg potential through community capacity building and development in terms of institution, economic, and ecological aspects. One of them is done by the locals that procure nutmeg seeds.

Nutmeg seed procurement was formerly allotted by the village government through village fund for the local cultivation. Unfortunately, the seeds from outside village, including those entering Egarwara, Wermenu, Kufuryai, and Manggera, in 2017. However, after 5 years, none of the nutmegs produced fruits. “In fact, they were all male nutmegs,” said Welminca Wania, a local woman from Egarwara Village.

To cultivate nutmeg, selecting the sexes, male and female, of the seeds is crucial to do in early planting process. It is only female nutmeg that produces fruit. From the fruits, people could collect seeds and fuli (red nutmeg coat) for sale.

People in Arguni Bawah could differ the male from female based on the shape of the seed. The tip of female nutmeg shape is rounder than that of the male one. When planted, it would be more difficult to see the difference. People should wait until the nutmeg produces fruit for around 5-7 years. If the nutmeg fails to produce fruit, it means the nutmeg is male.

“With the experience here, we encourage the community to produce their own seeds. These seeds will be bought by the village government and planted by the community,” said Yulince Zonggonou, the EcoNusa’s Community Organizer, who provides assistance to people in Arguni Bawah District.

The independent procurement of nutmeg among the community is more beneficial. Not only know the type of nutmeg, the community can also get extra income from selling seeds. The money turns over the village. “The village government buys at Rp20,000 per seedling. Each family could provide 75 trees at average,” said Otniel Surune, a youngster from Egarwara.

Not only promoting the locals to provide their own seedlings, they are also trained to produce shaky nutmeg. Prior to the training with EcoNusa, the community used to put all their harvested nutmeg into the same sack. Whereas, the shaky nutmeg has higher price than the normal one.

The shaky nutmeg is nutmeg seed that is peeled from its shell in such a way that it produces wobbly sound when shaken. Nutmeg the peeled off seed is far more preferable by businessperson because it is easily processed, and thus it costs more expensive. In Kaimana, shaky nutmeg costs Rp60,000 per kilogram, and the standard nutmeg Rp40,000 per kilogram. “The yield from shaky nutmeg is more lucrative,” said Sonya Runda, a local woman from Egarwara, while smiling. 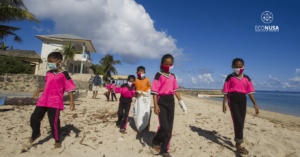 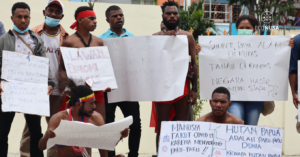