He sets out from small oasis and transforms into something big. He is like a wave resisting to sink. It is a metaphor to portray Eliza Marten Kissya, the Haruku Native Chief. He is 71 years old. But he still keeps his passionate spirit and dedication to look after the nature in his ancestor’s land, Negeri Haruku, Haruku District, Maluku Tengah Regency, Maluku Province.

Eli, the old man here is often named, opts for dedicating and spending his time amidst the Haruku nature. As to him, forest and sea are the sources of life that are worthy to survive from greedy and evil human deeds.

In commemoration with National Hero Day in 2020, over the river sideline of Negeri Haruku, Eli told his story to EcoNusa Maluku Expedition. It has been 41 years for Eli devoting his life to defend forest, sea and uphold local wisdom with respect. This is merely to keep the legacy from his ancestors for hundreds of years.

Sitting on a mini chair on the shiny white sand, Eli said that his parents had taught him since his childhood to take care of his nature. Eli dropped his education. He thought everyone could take care of the nature as long as they have sincere dedication despite the absence of education. When he began dedicating his life as an environmental ranger in Haruku, he was aware that being a forest and sea ranger (locally called Kewang) is challenging. Let alone, he is getting older now.

In his age now, instead of retiring, Eli keeps on his dedication to his homeland with all his heart, soul and body.

“Being a Kewang is a tough job. This is at no cost job, no salary, but I keep dedicating myself to the nature. Why? Because earth is the God’s gift to our next generations,” said Eliza who got government’s Kalpataru Award in 1985.

The Kewang at Negeri Haruku has been existing since 1600. So, far before the existence of modern human and green experts talk about sustainable development, conservation, reforestation and revitalization, Kewang has been far ahead acting for defending forests and sea through customary rules such as sasi or prohibition.

According to elderly in Haruku, sasi is applied to prevent the community from exploring natural resources excessively. Haruku people believe that defending nature is the same as improving welfare of its own nation’s generation.

A local ranger should stay alert in the forest as part of the implementation of sasi. For instance, when there is a villager that goes to the forest to cut sago or sago leaves for roof materials, it should get permit from a Kewang. This rule also applies even to the villager’s own property.

“Every Friday Kewang  in Haruku organizes a meeting. We talk many things including the number of sagos cutting upon the Kewang’s permit. Sago is the local honor for us to uphold. If neglected, the next generation might not recognize sago anymore,” said Eli.

Eli added that the most eminent sasi in Haruku is ikan lumpat (literally means jumping fish). The traditional prohibition is the combination of sasi for sea and river. In this case, sea fish is called to flow to the river. Ikan lumpat has its own tradition. However, there are many forms and meanings of  sasi. Even picking raw fruit is also called sasi.

“Thus, before we were born, local wisdom had existed. But we often misinterpreted it. For the reason, let us sustain and make use of nature wisely,” said Eli.

Eli also spoke about marine debris. He said that at certain times, much of marine debris at Haruku sea come from other villages. If it happens, all the kings (village heads) should assemble together and create rules on the prohibition of waste disposal at sea.

Eli considered the forests and ocean conservation mission promoted by EcoNusa has added the list of organization and community that fight against environmental crime. This fact makes Eli as a Kewang of Haruku have new friends.

EcoNusa Maluku Expedition has provided supports by planting 520 mangrove trees on the coastline of Haruku, beach cleanup and coral planting around Haruku sea. The team also provided assistances by giving health equipment to prevent Covid-19 and medical check. These supports were deemed the solidarity shared by EcoNusa to Haruku people who has completely dedicated their lives to safeguard forests and sea.

“Sailing to the north has unpredictable storm, it is time for EcoNusa and Kewang  of Haruku articulated their voices to save the earth right now,” Eli remarked with his rhyme to end the chitchat with EcoNusa. 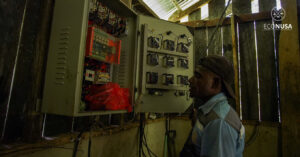 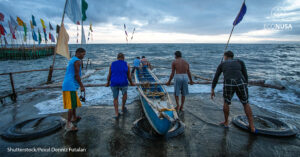