Peatland Restoration Agency (BRG)’s Deputy for Education, Socialization, Participation and Partnership Myrna A. Safitri said that young people could bring major issue of global warming mitigation down to the village level. In the scope of peatland farming, for instance, climate-friendly agriculture might be applied to reduce carbon emission risk.

Indonesia has 22.5 million hectares of peatland or the second largest peatland after Brazil with 31.1 million hectares. Despite the trivial size if compared to the globe’s land size, peatland saves 30 percent of the world’s carbon. The high content of carbon on the peatland has crucial role in anticipation of the rising temperature of earth surface.

BRG has established a Village Care for Peatland (DPG) as the education forum, community economic empowerment, and peatland restoration supporter. Up to September 2020, there have been 624 DPGs across Indonesia. East Kalimantan is the province with the most DPGs, 174, and 12 DPGs in Papua Province.

“Young people have important roles in various DPG activities. One of them is Peatland Farming Field School. The Field School aims to educate peatland farmers to practice peatland-friendly farming by not using chemical substance and no burning,” said Myrna in the virtual training of School of Eco Diplomacy’s Intermediate Class entitled National and International Agenda for Forest Protection and Climate Change on Saturday 24 October 2020.

Myrna said most of the Peatland Farming Field School are young farmers. She was optimistic that young farmers could change the stigmatized profession of a farmer. Besides, farming is the only economic sector with positive growth and high resilience to cope with Covid-19 pandemic.

“There are many youngsters who formerly felt their prestige, but then they make up their mind following the interaction. Being a farmer is not shameful, but making proud. Agriculture has high resilience against pandemic. Farming can be done anywhere. Just imagine a young environmental diplomat could boost up agriculture. It means they will take part in climate mitigation,” said Myrna.

West Papua’s Research and Development Agency Head Charlie D. Heatubun said that climate change and global warming have become an important issue to the government of West Papua. As to Charlie, young people has major roles in making every effort to curb the rising earth temperature.

“Here young generation has their very crucial roles. There is a youngster group in West Papua that is collaboration with us for the development of creative and green economies. We continue developing the non-deforestation eminent commodities,” said Charlie. 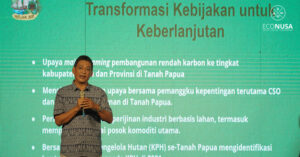 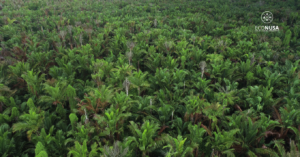 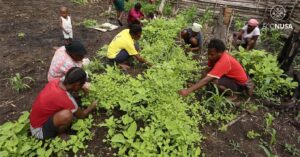