Fisheries and maritime sector are less prioritized in the controversial Job Creation Bill. For the reason, public calls the government to halt the hearing and deliberation of the Job Creation Bill. Public pass various judgments on the stipulation of the Bill’s articles for only giving red carpet to businesspeople investment but at the same time failing to notice sustainability of ecosystem, fisheries resources, fishermen and community in the islets.

“Sustainability issue is not prioritized in the Job Creation Bill. It can affect Indonesian performance in Sustainable Development Goals target achievement. The delusion on the  Job Creation Bill could impede the effectiveness of law enforcement,” said Stephanie Juwana, Director of Indonesia Ocean justice Initiative (IOJI), in an online discussion entitling “Job Creation Bill Impact to Law Enforcement in Maritime and Fisheries Sector” on 29 April 2020.

According to Stephanie, some simplified licensing as regulated in the Job Creation Bill potentially causes an excessive exploitation of maritime and fisheries resources ecosystem. License should be granted on the basis of risk will hamper controlling function of businesspeople activities. The central government could only grant permit to high risk fisheries activities.

Another concern comes from the change of sanction mechanism. The criminal sanction will be changed into administrative sanction for a number of stipulations on maritime and fisheries activities. The Article 93 item 1 and 2 of the Law No. 31/2004 on Fisheries stipulates the criminal act on illegal fisheries in Indonesian ocean. However, the Job Creation Bill amends the stipulation of criminal act into administrative one by imposing penalty.

“If profit is higher than the administrative penalty, could it give deterrent effect to the prevent the perpetrator (to do it again)? Criminal act in fisheries sector is connected to each other. Illegal fishing could be linked to document falsification or human trafficking for ship crew. Administrative sanction should not eliminate the other criminal act,” said Stephanie.

Executive Director of Partnership, Laode M. Syarif, considered that sanction amendment is against the legal principal in general sense. Laode worried that this sanction could give chance to illegal activities that damage the ecosystem and fisheries in Indonesia. Illegal fishing through destructive fishing has become hot issue in maritime and fisheries sector in Indonesia.

“Lenient sanction from criminal to administrative one despite the illegality has made me wonder whether or not we could protect someone so as to revoke the misdeed. If it is the case, it means we let go of the perpetrator,” said Laode.

General Secretary of Peoples Coalition for Fishery Justice (KIARA) Susan Herawati regretted the amendment of small fisherman definition as it could lead to legal uncertainty. Susan said that it could affect 98 percent of fisheries actors as small fishermen. “We worried that the state facility that should have been allotted to small fisherman would be accessible to businessperson (to the subsidy). Should the Job Creation Bill be deliberated, there would be larger gap,” Susan said.

On the other side, Supervisory Director General for Maritime and Fisheries Resources, TB Haeru Rahayu, expressed his optimism that fishery actor would comply with the deliberation of the Job Creation Bill. Various stipulations that have not been designated in the Job Creation Bill would be elaborated within a Government Regulation and Ministerial Regulation.

“We do not to worry too much. Currently we have made synergy across sectors in control. There are Sea Security Agency (Bakamla), Indonesian Navy, Sea Police Force and even community involved in the inspection. We give stern sanction to any illegal and destructive fishing. Other than that issue, we can communicate it with other law enforcers,” said Haeru.

Maritime and Fisheries Ministry’s Director General for Fishery, M. Zulficar Mochtar, said that Indonesia has currently had an economic momentum that can be utilized by fisherman and businesspeople. Based on the Maritime and Fisheries Minister Decree No. 50/2017 on the Potential Estimate, Eligible Amount of Fishing, and Level of Fish Resources Utilization in the Republic of Indonesia, there are 12.54 million tons of fish to catch. Meanwhile, the production of catch fish is 8 million tons.

“We encourage (to do it) if the average number of ships is still realistic. We surely should notice unreported data. In terms of momentum, our fishery needs serious investment. However, we do not want it to be too far. Therefore, we should definitely monitor together the instrument on stock, management plan and data collection,” said Zulficar. 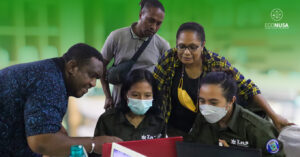