One day a man stopped his motorcycle on the roadside in Sarawandoni Village, Kosiwo District, Serui Mayoralty in Yapen Island Regency, Papua, in 2014. The man was in green uniform with “POLHUT” signage above his right pocket. He was enraged by the roaring sound of chainsaw. “Who is cutting the tree?” the furious man asked.

In fact, the roaring sound came from a man who was cutting a tree. The harsh question did not frighten that man. From the height of the tree, a medium well-built man inquired back, “What do you want? What do you want from me? Do you think you possess the forest so you can warn me?”

Realizing that the man was natively born in that place, he thought all land and resources there belonged to him. Thus, he felt he had the rights to cut the trees. “If only you could give me money, I stop now. That’s all. I am just waiting for money. If you could send me IDR1,500,000 today, at the very moment I would stop,” the man shouted.

The fragment above was the first encounter of Andi Leo Karubaba with an officer of Yapen Island Regency’s Forest Management Unit (KPH) whose office was nearby Andi Leo’s residence. Andi had been cutting trees for quite long time before to meet the need of his families, including to give financial support for his three siblings’ school tuition. Andi cut trees for the first time when he was in the Elementary School in the 90-s. He became more often slicing trees in 2000s due to the high demand from local tempeh and tofu industry and asphalt project for road access in Serui Mayoralty.

However, he made exception on his slicing list for Matoa and Merbau to supply the timber demand. In addition to the two types of wood here, Andi also cut the trees in various sizes of log. Market made the pricing. One pickup vehicle of logs cost IDR300,000. But Andi should also put up with hardship when the cost of one pickup vehicle of logs jumped down to IDR50,000 up to IDR150,000. On his peak, he could earn up to IDR2 million a day after slicing and selling four trees.

“It is the forest that could meet the dire need. We cut trees based on what necessarily needed. To pay school tuition, for instance, we need about IDR2 million, then we slice trees valuing only for that amount. We got that for one or two days. But if we go fishing, it will depend on the weather and fish. Otherwise, we could only earn around IDR200,000-300,000 per day. In doing so, it will take around one to two weeks despite the urgent need,” explained Andi.

Being an illegal logger was the hardest part of Andi’s life. Slicing trees is certainly high-risk job despite the fresh and lucrative cash. Cutting trees will at least need three people as a team with different tasks. One will cut the tree using chainsaw and the rests should be prepared for directing the fall of the logs.

The process has not ended up yet. These team should slide the logs through the valley so as to fall down to Sarawandori Bay. Then, from there they should drag the logs from boat for the delivery to Serui. Sometimes, they had bad days when the log fall into the open sea and they should dive to save the log. Another risk also comes from wildlife when they slice trees in the forest.

“My father’s sibling was once got a venomous snake bite from locally-called Aranda snake. It is silver in color and its head is like Cobra,” said Andi.

Andi was completely aware that it is not good to continue is course of life by being an illegal logger. It does not simply deal with the risk, but Andi would not have leisure time after selling logs in Serui. To cut trees, he should go at 9 in the morning to the forest. Cutting and selling processes until he gets fresh cash will usually be at 7 at night. Upon arriving home, Andi would be in dead beat by his fatigue. Andi could hardly do anything else but dinner before going to bed in his exhaustion. 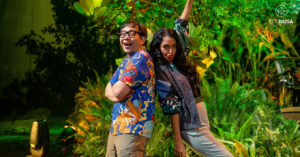 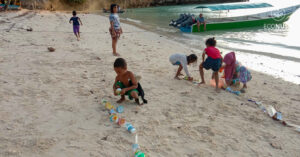 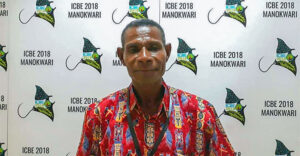