Sunday morning, July 21, 2019, became a historic day for every individual, organization, and community to unite the voice in a joint movement that is “reject disposable plastic”. The movement with a pure disposable plastic reject was born from a concern for protecting the environment for a better nature, and for the sake of future generations.

Thousands of people were enthusiastic in voicing their support for reducing plastic waste in Indonesia. Ranging from children to adults. Support also came not only from within the country but other citizens also contributed to this movement. As for the public figures who are also environmentalists such as Kaka and Ridho Slank, Robby Navicula fiber, were present to voice their concern for the sea that is free from disposable plastic waste.

The plastic-free parade movement is increasingly lively with the presence of the Minister of Maritime Affairs and Fisheries, Susi Pudjiastuti. In addition to serving as minister in the Ministry of Maritime Affairs and Fisheries (KKP), Susi is also the chairperson of the Nusantara sea guide board. This eccentric minister led a plastic-free march launched by approximately 49 organizations and environmental groups.

The march started from the Hotel Indonesia (HI) Jakarta Roundabout to end at Monas as the culmination point of the plastic-free march. This route also witnesses the concern of the community, especially the people of Jakarta, about the importance of protecting the environment from damage caused by plastic waste.

The spirit of support for refusing the use of disposable plastics clearly emanated from the faces of the plastic-free parade participants. This can be seen from the many parade participants who were present with posters from various waste materials, as a symbol of voicing the commitment of each individual to no longer use disposable plastic in their daily activities.

Not only that, Indonesian online media also reported on this activity. More than 50 media reported the parade, and informed the purpose of the parade to the public throughout Indonesia.

The appearance of “the plastic monster” in the crowd gave color to the march on Sunday morning. Plastic monsters themselves are an emergency symbol of ‘Rejecting the Use of Disposable Plastic Trash’ created by a number of communities and organizations that care about the environment.

For information, the existence of a plastic-free march as a form of joint movement that aims as a means of awareness campaigns to the community, support to the government in strengthening the policy of reducing plastic waste. In addition, this movement also targets corporations to no longer use disposable plastic materials in packaging products sold, and shifts to more environmentally friendly material innovation. 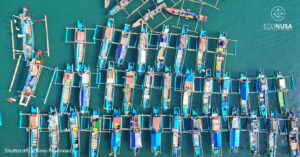 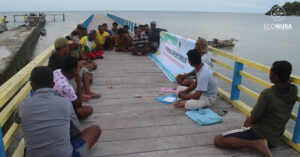