Home » EcoBlogs » Action for Young Activists for the Land of Papua

Papua’s forests are one of the future forests that can still be expected after the forests in Kalimantan and Sumatra are in an alarming position. Forest damage is caused not only by the occurrence of natural disasters but also because of the human hands that began to act to control nature.

Glen explained that there were 3 problems in Manokwari namely floods, garbage, and the threat of drought. “Speaking of floods in my view occurs because the water absorption has been damaged. So if water could be retained by soil and trees in the past, it cannot because the land has been replaced by concrete for the yard, “

“An important issue that must be added is forest encroachment. City Forests such as Gunung Meja have exceptional services for the people of Manokwari because Manokwari still relies on the water there, “Jemmy said. He then invited the participants to start campaigning through social media so that the message they wanted to convey reached the wider community.

Also do not forget to look at the socio-cultural side. Pasifilionira Sawaki said that local people have the right to be angry if their territory is disturbed by people who do not have their rights. “Make traditional leaders as partners and then equate their understanding of what they want to pursue. There are many rules, but if there is no awareness, there is no meaning. “

“We want to build awareness in the Manokwari community and not forget to improve the community’s economy as well. Hand in hand to protect nature that God has given to us. Never ask the nature we have ever given, but ask us what nature has already given, “said one of the SED 2019 participants.

The 2019 School of Eco Diplomacy (SED) is one of the flagship programs of the EcoNusa Foundation. Bustar Maitar as CEO said that this program was conducted to look for participants who have strong abilities to take an active role in efforts to save forests in the Land of Papua specifically and save natural resources in general and commit together with the community to build sovereignty in natural resource management.

As the Program Manager of Public & Youth Mobilization of the EcoNusa Foundation, Rina Kusuma said the Basic Training of the School of Eco Diplomacy conducted in the city of Manokwari was attended by 24 participants from high school students, students and activists of environmental issues. Participants held discussions, visited the Table Mountain Forest and Petrus Kafiar Beach, and designed environmental actions to protect the forest and marine environment from rubbish. In addition to basic class training, EcoNusa will also hold middle and upper School of Eco Diplomacy programs for young people not only in Tanah Papua, but also in Indonesia. 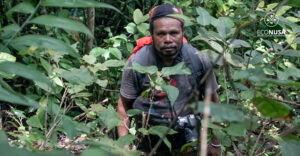 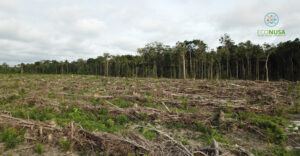