Home » EcoBlogs » Sea of the Nation’s Future, Let’s Take Care of Together

In order to celebrate the 74th Anniversary of the Republic of Indonesia’s Independence, Pandu Laut Nusantara, the Ministry of Maritime Affairs and Fisheries (KKP) of the Republic of Indonesia, the EcoNusa Foundation with 300 communities, organizations, private companies, SOEs and Regional Governments throughout Indonesia again held the Facing Movement Sea on Sunday (8/18). This second movement is aimed at building the awareness of the Indonesian people that the sea is the future of the nation.

Disposable plastic waste is one of the biggest problems in the ocean of the archipelago. The Indonesian sea is the second largest contributor of waste in the world, after China. This threatens more than 800 species of marine life, including coral reefs. To deal with this, the government is committed to taking various steps. One of them is by banning the use of disposable plastics, especially bottled plastic drinking water, in the KKP environment since 2018.

The clean beach and sea movement is an annual program carried out by the CTF since 2002. The activity has now become part of the National Plan of Action to reduce plastic waste entering the sea. Pandu Laut Nusantara makes this agenda an important part of the action to preserve the Indonesian sea.

Indonesia has a coastline of 95,181 km and is the second longest coastline in the world, with an area of sea waters reaching 5.8 million square kilometers, which is 71% of the total territory of Indonesia. As the largest archipelagic country in the world with 17.504 islands, the sea is the life support of the Indonesian people. In the sea, we depend on the lives of our children and grandchildren.

“Because the sea is the future of the nation, I urge all elements of the nation to help protect the Indonesian sea. Not only from fish thieves, but also from destructive fishing activities, the use of fishing gear that is not environmentally friendly, and last but not least the contamination of marine trash, especially plastic waste. No more throwing trash into the sea and reducing the use of disposable plastic. The sea belongs to the nation, which must protect not only the government or the sea guides, but all of us, “said Minister of Maritime Affairs and Fisheries Susi Pudjiastuti.

Pandu Laut Nusantara is a social movement inaugurated in 2018 by Mrs. Susi Pudjiastuti, consisting of various layers of individuals and communities who pay attention to the sustainability of marine life.

Chairman of Pandu Laut Nusantara, Bustar Maitar said “The first period of the Jokowi government has shown success in strengthening sovereignty over our marine fisheries, so there should be no step back. Strengthening our efforts to protect the sea is an absolute must. The sea-facing activity that is carried out every year is an effort to build awareness and a sense of belonging for all Indonesian people towards our sea ”

While Kaka Slank, as the guide of Nusantara Sea Scouting on this occasion, again invited the community to care for the sea “Our future is the ocean, face it, embrace it, love it”. A similar sentiment was also conveyed by Ridho Hafiedz Slank “We know that Indonesia is the second country in the world that contributes to plastic waste at sea, as an archipelagic country our marine wealth is an asset that must be maintained. Since ancient times the waters are a mirror of civilization, keeping our waters clean shows that we are civilized humans. “

According to Professor of the Bogor Institute of Agriculture, Hariadi Kartodihardjo, “The sea is a vital part of life. In addition to being a medium for water circulation, it also regulates the life cycle of the mainland. For this reason, the marine environment is a social and economic pillar of society. Even though people know how vital it is to life, most people are reluctant to use this knowledge to act, “he added. For this reason, Pandu Laut Nusantara has a strategic role because it is sourced from a collective movement. This movement results in educative decisions, which are not derived from logical decisions.

This movement is centered on the east coast of Ancol Village, Jakarta by soaking, cleaning the sea, facing the sea simultaneously with 108 points throughout Indonesia, singing the song Padamu Negeri and eating fish together. 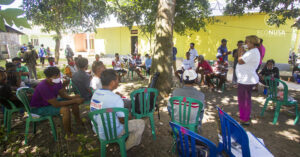 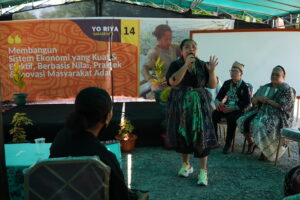 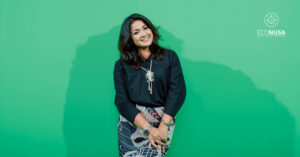