Papua area is dominated by forest which has high biodiversity. For indigenous peoples who live in the area around the forest, their daily lives depend on the potential and forest products.

Unfortunately, amounts of forest in Papua are increasingly diminishing. The next impact, sustainability of various potential natural resources and biodiversity inside the forest are also threatened. Beside tree logging, land clearing for oil palm plantations also causes loss of forest area in Papua. According to the West Papua Province Food Crop, Horticulture and Plantation Agency, the deliverance of forest areas for oil palm plantations in West Papua has reached 399,800.48 hectares by today. This number is still being updated based on the real time condition.

As a result of the forest area alteration into oil palm plantations, a lot of indigenous communities often have been forced to lose their customary land. They have to become the losers, because they can no longer use the forest and enjoy the forest products that should be their right as indigenous people. Not pleasing their life in the future to be similar with indigenous peoples in other regions in Papua whose forests had been completely used up and converted, people in Kampung Sira and Manggroholo, South Sorong, West Papua rejected logging and oil palm plantations in their forest areas. Instead, they want to protect their remaining forest in their customary areas. So that they still can get natural products from the forest to fulfill their daily needs.

Forests in these two villages, Sira and Manggroholo are part of the Knasaimos traditional territory which covers 81,390.6 hectares in total. Sira village is located on the hills. While Manggroholo village is in the valley. The two are 200 meters away, separated by sago groves. Citizens in those areas are still in the same blood line. These two villages are located around 4-5 kilometers from the capital city of South Sorong Regency, Teminabuan. In this forest, various types of trees such as merbau, nyatoh, resin, and aloes stand sturdy.

To defend and keep these forests remain to them, since 2008 the villagers of Sira and Manggroholo villages have strived efforts to obtain Village Forests status for their forests which have existed in their customary area. Through the webinar “Developments and Options for Follow-Up Evaluation of Palm Oil Plantation Licensing in West Papua” held by Econusa, Greenpeace Forest Campaigner, Amos Sumbung explained that during the year period of 2008 to 2013, villagers of Sira and Manggroholo conducted a  forests mapping in their area. Then, in 2013  the Village Forest proposal was submitted to the Minister of Forestry.

“In 2008 villagers refused oil palm entering their area. They made a declaration to reject logging and palm oil. They invited the Regent and Parliament to convey ‘Our area  is small, if these forests are cut down, where do we go then? Where are we looking for wood to build our house? Where do we have to go for gardening? Where do we go to get medicines? If forests in these two villages are cut down, where will we move to? ‘”Amos said, explaining the situation at that time.

Later, in 2014, their struggle was answered with the issuance of the Forestry Decree of Manggroholo and Sira Villages by the Minister of Forestry. The Sira and Manggroholo forests became the first village forests in Papua with a total area 3,545 hectares.

After their purpose to have their rights to maintain forests in their area had been realized, the struggle of the Sira and Manggroholo people did not stop there. Since the issuance of the Village Forest Decree in 2014 until now, people in both villages have continued the struggle to keep manage forest products with regularity and sustainability. They manage non-timber forest products, such as processing resin, organic farming on a small scale, as well as increasing sago production and diversification of products from sago raw materials.

“Our sago is a superior yield. I can finance the school fees of my kids, it’s from sago yield. 20 kilos of sago on a sack is worth 200 thousand rupiah,” said Yoel Smere, a villager who were met by Bentara Papua and Econusa team. He is one of the villagers who depend their lives on forest products and sago.

In addition, to utilize the forest and maintain its sustainability, according to Amos’ explanation, the people in these two villages are actually also establishing ecotourism in the last two years. Unfortunately, due to the current situation in the middle of a pandemic which brings difficulties and uncertainty, the operation of ecotourism has been delayed until next year.

Efforts to protect village forests are carried out strictly by the villagers of Sira and Manggroholo through patrolling around the forest and conservation areas. While they are hunting in the forest, they also monitor the forest to anticipate the presence of loggers. Young and old people are mobilized to conduct surveillance to protect the forest as their priceless source of livelihood. 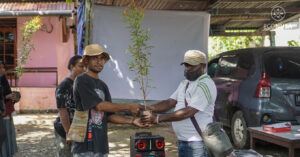 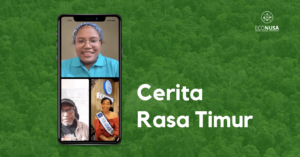