Home » EcoBlogs » Grown up Uptown, but Commit to Developing Her Village

A local woman of Tanggaromi Village seems to get older. But her agility reflects her never-ending spirit of life. On the scorching sun of Kaimana, she shouted at her neighbors greeting them who were ready to work and sell their goods at Tanggaromi market. The woman stopped her steps just dropping by and having chit chat with taxi driver who always helps local women to Kaimana.

The woman, commonly called Mama Mathilda, is now 62 years old. But her age does not stop her hard work. She goes out every day to go to market. She sometimes goes to the location, five kilometers away from Tanggaromi Village, in Kaimana District, West Papua, where she cultivates banana. “The heat does not stop our work. We are accustomed to working under the heat like this,” said Mathilda.

On that day, Mathilda brought EcoNusa Team with her to visit her banana cultivation. “Banana always exists despite the season. Banana sells well every month. Banana does not reap at the same time. A day can produce 5 bunches,” she said. When she should sell her crop, Mathilda sells all regardless the types. “As to me, all banana is the same. Dewaka or Raja banana are all the same. It costs ten thousand rupiahs. But when I sell them to downtown, it costs twenty five thousand rupiahs,” she said laughingly.

Mathilda often sells her crops to Timika. “When it is sold to Timika, there is collector there. Sometimes the collector asks for some bananas. If my crop is less, I will go to other location for additional supply,” she said. She tells that she often helps her neighbors who are still innocent as a seller. “I do not want people play a fool on them. I always teach them so as not to be foolish. The fool is unfortunate,” she said.

“I grow up in town. I went to school in town up to 2006. After that, I went back to the village to cultivate my own land. Despite the fact that I grew up in town, it does not mean I could not be a farmer. It is the legacy of my parents that I always keep in mind,” she said, “all of my nine children live in Timika. They are also farmers. Sometimes they visit me or in turn I see them.”

Living alone after his husband passed away in 2005 did not make Mathilda give up her life. “I have nine children who always keep in touch every day. They are even upset if my cell phone is out of service. They want to buy me the new one. But I refuse them, as long as I could make a phone call and text, it is enough for me. I can contact them, that’s all,” she said.

When asked about banana to Mathilda, she replied, “That is life. Banana is irreplaceable. We plant banana and we sell the crop, then we get the money. It is satisfying, isn’t it? We can use the money to afford rice, sugar, clothes, underwear. Banana has given me life,” said Mathilda convincingly. 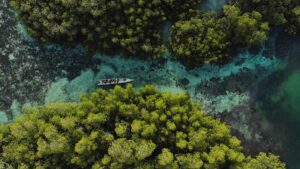 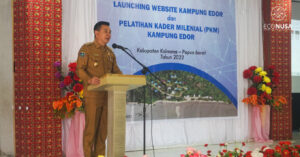 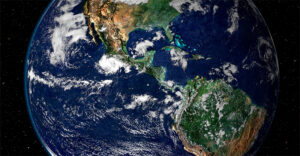