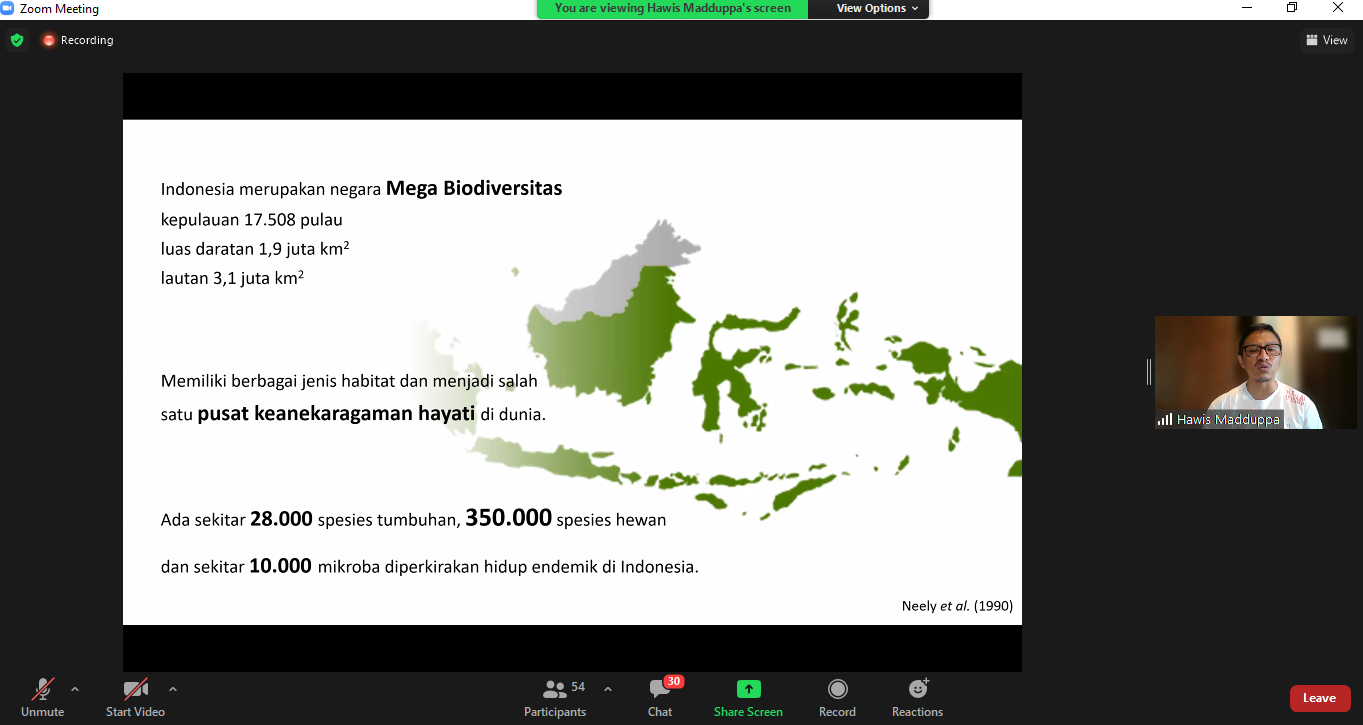 The excitement of the 2021 Young Papuan Scientists / Ilmuwan Muda Papua (IMP) program has not ended yet. On Saturday, December 18, 2021, after completing a series of programs ranging from proposal selection to research bootcamp to the process of gathering research data, a talk show titled “The Role of Researchers in Biodiversity Countries” was held. For two and a half hours, the online talk show was enthusiastically attended by young people from all over Indonesia.

Young Papuan Scientists is a program run by the EcoNusa Foundation in collaboration with the West Papua Province’s Regional Research and Development Agency (Balitbangda). This initiative began in 2020 with the goal of producing young Papuan scientists capable of solving a variety of challenges and social and environmental issues in this biodiversity country, particularly in Papua. In 2021, IMP returned to a rapturous welcome. From 104 research proposals, 25 young scientists from 5 universities in Papua were selected to participate in this program.

Participants in this talkshow got the opportunity to hear directly from five participants of the 2021 Papuan Young Scientist program about their research experiences. They are Elon Boari, Maria Priska Numberi, Vivi Mariana, Indriani Rammah, and Yoel Tirso Dando Soda. Despite the fact that their research topics were all different, all of them agreed that participating in the Young Papuan Scientists 2021 program was exciting because they could gain a lot of new knowledge and experiences. However, they also acknowledged that they faced a number of challenges during the research process, particularly as this is their first time conducting research firsthand.

Maria, for example, is working on a research titled ‘Analysis of Nest Characteristics and Population of Lekang Turtles in Yewana Village, Depapre District, Jayapura Regency, Papua.’ She had to drive for two hours to get to the research site in Yewana Village, and then walk along steep, winding roads. Meanwhile, Vivi, who was exploring ‘The Utilization of Red Fruit (Pandanus Conoideus) Paste and Thatch Screwpine Fruit (Pandanus Tectorius) Flour in the Creation of Sago Cookies’, was up against another obstacle. Thatch screwpine has never been utilized to create flour or as a material for sago cookies. As a result, Vivi had to experiment a lot before she finally found the appropriate formula that worked. She was constantly confronted with issues such as burnt cookies.

Despite the numerous challenges they must overcome, the Young Papuan Scientist 2021 participants are satisfied when they have completed their research and are able to contribute something new to the development of the environment and society. Yoel’s research on the Use of Dried Banana Leaves as a Nursery Medium for Cocoa Seeds discovered a cheaper and more environmentally friendly nursery media for cocoa farmers than the frequently used burlap sacks or towels. Indri’s research on the Design of Tourism Areas in the Outermost Small Islands (Habe Island) with a Sustainable Architecture Approach is also worth mentioning. Indri creates sustainable architectural solutions for the future of Habe Island as part of her research, taking into account social, cultural, and environmental factors. Then, Elon also succeeded in identifying the diversity of birds in Malagufuk Village through his research titled Bird Species Diversity (Aves) in the Bird Watching Ecotourism Area in Malagufuk Village. Aren’t all of these researchers incredible?

After listening to the young scientists’ experience, it’s time to listen to the sharing session from Dr. Mirza Dikari Kusrini, a lecturer in Ecology and Management at Bogor Agricultural University’s Faculty of Forestry and the Environment, and Dr.rer.nat. Hawis Madduppa, S.Pi, M.Si, Secretary General of the Indonesian Academy of Young Scientists. Dr. Miki eagerly offered her many years of knowledge as a researcher. “Success in a career as a researcher is a protracted process,” she told the audience at the conclusion of her presentation. It takes discipline, resolve to keep working on varied problems, a desire to learn more, and the ability to communicate and act with flexibility.” 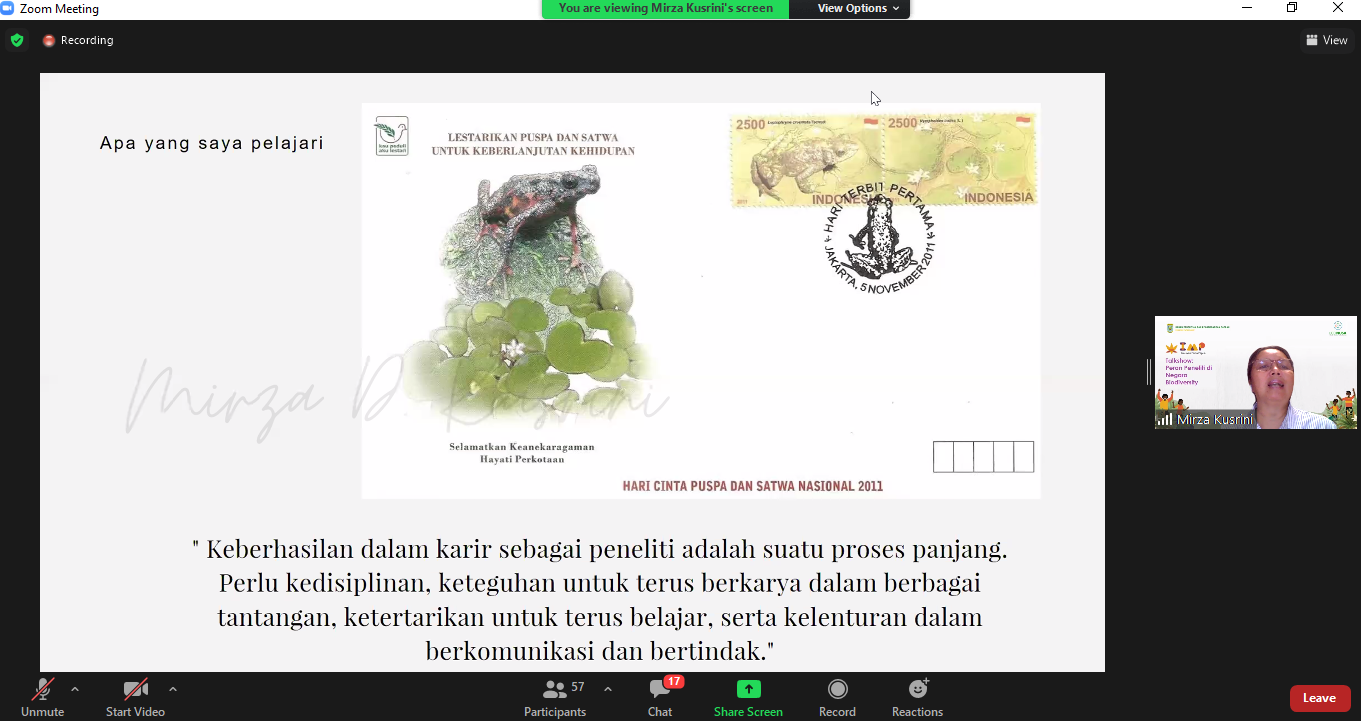 Then, Dr. Hawis also shared his research experiences, particularly those involving the sea. He underlined the necessity of young people becoming researchers. “Indonesia is a mega-biodiversity country with a diverse range of habitats and one of the world’s biodiversity hotspots. There are around 28,000 plant species, 350,000 animal species, and 10,000 microorganisms in Indonesia. So, there’s still a lot that has to be looked at further in order to ensure that biodiversity is preserved in the future,” he said.

So, who’s keen on becoming  a young researcher? Whatever field you are in, you can conduct research that will benefit the environment and the community around you. Let’s begin by asking yourself what issues pique your attention, and then conduct research to find solutions. To be even more prepared, keep an eye out for the next Young Papuan Scientist program and make sure to sign up!

Protecting Paradise in Eastern Indonesia! Defending Indigenous Communities Rights
Voice Your Support, Now!
Related Posts
Social Transformation
Palm Oil Pandora: Primadona of Non-Oil and Gas Exports to Environmental Destruction
The Concept of Conservation Do not Overcome Local Wisdom
The future of Indonesia’s seas in a portrait of the life of traditional fishermen
Recent Posts
Let’s Get to Know These 2 Outstanding Papuan Scientists!
5 National Parks in Maluku & Papua You Should Know!
“I am Native, I Want to be Self-reliant”

On the 27th-29th of May 2022, the Kewang Muda Maluku 2022 program was successfully held in Laga Village, Gunung Api Island, Banda Islands. A total

The Paris Agreement is frequently mentioned when the topic of climate change is discussed. In a nutshell, this agreement is a global agreement aimed at

Many efforts are being made by all parties to combat global warming on earth. On a global scale, the United Nations Climate Change Summit (COP

Nowadays, many environmental disasters are occurring in many parts of the world including Maluku. Starting with forests that are being cut down at an increasing