As part of the series of EcoNusa Maluku Expedition, the team jointly with local communities in Maluku did some environmental activities in surrounding Haruku water. Planting mangrove, translaplanting coral and marine debris cleanup were among the activities. These were done as the EcoNusa supports to the conservation of nature as done by Haruku people.

Haruku people and its Kewang (local sea and forest ranger), Eliza Marten Kissya, have conserved environment for years through their local wisdom. For instance, sasi (prohibition) tradition which bans the taking of forest and sea resources in a certain period of time. In addition to sasi, environmental conservation was also done by cultivating mangrove and preserving gosong bird.

Teria Salhuteru, Coordinator of Moluccas Coastal Care (MCC), as a community joining the mangrove planting in Haruku, admitted that since 2017 he has been actively safeguarding the Maluku coastal areas by planting mangrove. Ambon Bay compound is the starting point to the community’s initiative in conservation.

“In Ambon Bay we had planted 2,200 mangroves. With EcoNusa now we also plant mangrove. Around 520 mangroves of rhizophora type will be planted on the coastal area of Haruku Village,” Teria said.

In 2019, earthquake rocked Maluku with more or less 2,000 aftermath quakes. Many areas and villages inlcuding coastal areas in Maluku were affected. That was the basis for the community initiative to plant mangrove.

“Mangrove has very crucial function to keep the coastal areas. When there is disaster, mangrove could serve as an ecosystem that keep coastal areas stable while protecting the area from wave and abrasion,” said Teria.

As to him, mangrove in Haruku has downsized in number. By planting new mangroves, he hoped that these mangroves could serve as the major buffer for mangrove ecosystem that protects coastal areas.

Dealing with an evaluation of mangrove sustainability, Teria said that every six months there will be monitoring for the newly planted mangrove. The planted mangrove has critical moment for two weeks. If it survives, it passes the critical period and could grow well.

Actually mangrove is fragile and breakable during north season due to the relatively huge wave. For the reason, MCC tries to put net and nani wood as buffer which stands from wave and waste.

“Mangrove survival actually depends on the waste and wave. Next month we plan to plant other 500 mangroves here (in Haruku),” said Teria.

Meanwhile, the Coordinator of Tunas Bahari Maluku (TBM), Zainudin Mokan, said that based on observation of some points in Haruku, it was found that most of coral reefs are in impairment. The condition was due to the peoples’ activities such as explosive fishing.

As to him, transplanting coral reef is the alternative to keep environment and conserve the impaired and diminishing coral reefs. The coral transplanted by EcoNusa team and TBM is of Acropora type. This type of coral could grow within a year. The development takes long duration and relatively goes through slow process. It grows only about 1 centimeter a month. TBM will undergo a monitoring every three month. The medium used for coral reef transplantation is iron in various shapes such as triangle, house, chair and desk.

“During transplanting the coral reef in Haruku, there was found plastic waste that affects sea ecosystem and water substrate,” said Mokan.

On 7 meters deep nearby the transplanting spot area, waste was also found. Most of them was sanitary napkin, pampers and detergent or food plastic wrap. Not only in Haruku, plastic waste pollution has fatally affected sea and coastal substrate in Ambon Bay.

Representing TBM, Mokan expected that EcoNusa Foundation does not simply concern with sea and coastal conservation for the short term but also in sustainable term.

“There are many homeworks to accomplish collaboratively to protect Maluku and Papua sea. We hope this will be a long-term action not only at urban areas but also in remote regions,” he said.

The transplantation of coral reef and beach cleanup surrounding Haruku water was participated by 14 peoples including Ridho from Slank who joined the mangrove planting. 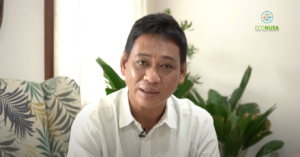 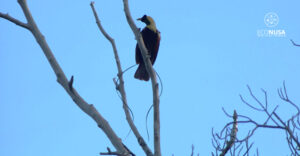