Nuruwe Village in Kairatu Barat Subdistrict, West Seram Regency, has a variety of commodities that are cultivated by the community. There are nutmeg, cloves, coconut (copra), sago, seaweed, as well as traditional drinks of the type of liqueur. Meanwhile, the concentration of superior commodities cannot be ascertained, which ones are priority commodities.

Hesty Matital, a seaweed farming fisherman from Nuruwe Village, said that currently they are experiencing crop failure because they are attacked by cat reeds.

“We experienced crop failure. Don’t know what caused it. “But certainly attacked by cat reed pests,” he said.

Hesty added that the people in Nuruwe have been cultivating seaweed since 2005. All that time, there has never been any crop failure. He assumed, perhaps, that there would be an exchange of seeds before distribution.

“Or it could be that the seeds we get have been mixed with other seeds that have been affected by the disease,” he said.

In this village, there are at least 8 groups of fishermen cultivating seaweed. These groups have assistants from related agencies in West Seram District. Unfortunately, there is no cooperative that can accommodate their cultivation.

Fit Lewaney, another fishermen group also shared a similar sentiment. He revealed that they do not have a cooperative that can manage fishermen’s marine products. His party has submitted it to the West Seram Fisheries and Marine Service, but it has not been responded to.

If the government is willing to run a cooperative, Fit will give away his vacant land. “Yes, if the government wants to provide cooperatives for fishermen’s welfare, why should they refuse. In principle, we are willing, and will even prepare empty land for the building, “he said.

In this Nuruwe Village, the problems do not only occur with seaweed commodities, but also vary. Sopi, for example, can be cultivated by the community and generate a lot of money. However, on the other hand, the Maluku Government cannot legalize sopi.

Departing from these various problems, EcoNusa then took the initiative to visit fishermen and farmer groups in the village. This step was taken because he wanted to map the types of superior commodities in the Seram Island area.

Wiro Wirandi, EcoNusa’s Oceans Program Manager, said that their goal was to target Nuruwe because they wanted to map out what commodities are in Nuruwe Village.

“So we want to see, what commodity here actually depends on? Because in Nuruwe we do not find any fish there, “he said.

Regarding the cultivation of seaweed found in Nuruwe, the Maluku EcoNusa Expedition Team wants to ascertain whether this seaweed commodity can really support food security or not. Furthermore, EcoNusa will strive to help the community regarding education that can maximize commodities in the region.

“The reason we are here in Nuruwe is to map commodities and also provide education to the community. In the future, EcoNusa plans to prepare merchant ships in Banda. We will also cooperate with Pattimura University (Unpatti), “he said. 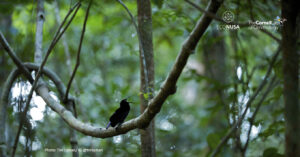 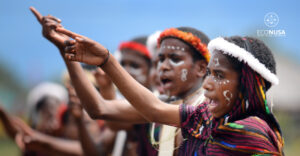