After the Covid-19 pandemic petered out, 2022 became a special year for all Scout members throughout Indonesia because there was a grand event of the XI National Scout Jamboree (Jamnas) on August 14-20, 2022. Activities at the Campground and Tourism (Bumi Perkemahan dan Wisata/Buperta) Cibubur, Jakarta, were attended by 11,506 Scouts at the Penggalang level (youth aged 11-15 years) from all over Indonesia, the Gugus Depan (Gudep) based at the Embassy of the Republic of Indonesia (KBRI), and representatives of Scout organizations in the Asia Pacific region.

As a movement, Scouting aims to form a young generation with persistence, good morality, mentality, and attitude in such a way that it leads to a bright future for Indonesia. It is undeniable that youth are the pillars of hope that will determine the fate of the nation in the future, including the fate of nature and biodiversity in the future.

The EcoNusa Foundation with EcoDefender and Pejaga Laut attended the XI National Jamboree, precisely in the area of Global Village for Sustainable Development booth, to share knowledge with the Scouts about the mangrove ecosystem. They are fed with knowledge about the importance of protecting mangroves as an effort to fight the climate crisis and support the welfare of coastal communities. The activities carried out at this booth also varied, ranging from mangrove classes, quizzes with attractive prizes, and various educational games.

Indonesia is a maritime country that has very high mangrove potential. Based on the National Mangrove Map published by the Ministry of Environment and Forestry, it shows that the total area of ​​mangroves in Indonesia is 3,364,076 hectares, or equal to 20 percent of the total mangroves in the world. As an important part of biodiversity, not only for ecosystems, the existence of mangroves is also fundamentale for the survival and economy of coastal communities.

Wiro Wirandi, Ocean Program Manager of the EcoNusa Foundation as well as a speaker in the mangrove class, explained to the fundraisers that mangroves are a unique ecosystem, located in tidal areas, and serve as the important part of Indonesia’s rich marine biodiversity. “As an ecosystem, mangroves absorb pollution and greenhouse gas emissions, and function as wave breakers so they don’t cause disasters on land. The denser the mangroves, the more secure the coastal community will be,” he explained.

The fishing game is one of the interesting educational games given to the participants in the mangrove class. They were divided into several groups and played the role of fishermen in the sea. This educational game taught the concept of measured fisheries in a simpler way. In this game, the participants were given insight that in the process, capture fisheries need to be controlled so that fish stocks do not run out and need to be managed sustainably.

Then, the Scouts were also given facts about the various threats that caused the degradation of the mangrove ecosystem, among others due to the logging of mangroves to be used as fuel by the surrounding community. On the other side, mangroves have enormous potential to improve the living standards of coastal communities, such as supporting food security and potential ecotourism destinations. Therefore, a joint contribution is needed to protect and preserve mangroves.

“When I go back home, I want to make a movement to save mangroves and socialize the importance of mangroves to schools and the surrounding community,” said Ainun, one of the Scouts who visited the EcoNusa booth. Not only for Ainun, the mangrove class has inspired many Scouts to take good steps and be a part of efforts to save the mangrove ecosystem when they return to their hometown.

Wiro added, Scouting is the largest youth movement in Indonesia that has the skills, can be the foremost cadres in protecting nature, especially the mangrove ecosystem. “In the mangrove class yesterday, there were several commitments that emerged from the Scouts, one of them wanted to restore the mangrove area that was lost due to destructive development. This is very interesting and we need to support it together,” said Wiro in an interview.

Realizing the rapid development of digital communication, EcoNusa also collaborated with BBC Media Action to provide content creation class for Scouts at the National Jamboree. Through this class, they are expected to become content creators who can spread the positive spirit for the conservation of nature to those around them.

The XI National Jamboree officially ended on August 20, 2022. On the Appreciation Night for Young Ambassadors of Jamnas XI at the Global Village for Sustainable Development, as the token of apreciation, EcoNusa Foundation gave the sash of biodiversity ambassador to the best 68 Scouts representing 34 provinces in the EcoNusa mangrove education class. This sash was symbolically attached by Nina Nuraisyah, Econusa’s Director of Communication and Youth Mobilization, to M. Alif Alfarabi, a Scout from the Kwartir Cabang (Kwarcab) of Sukabumi, West Java, who represented the Scouts.

“Hopefully, Scouts can become champions who are aware, understand, want to share information, and also take real action to jointly try to tackle climate change, one of which is by maintaining biodiversity such as mangroves,” said Nina. 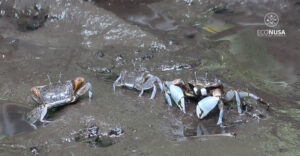 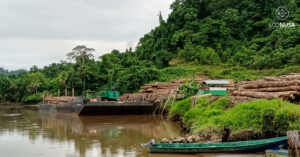