The impact of Covid-19 transmission has affected the community in various aspects of life across the country. Maluku Island which is far-off from Jakarta also got significant impact. Both health and economy aspects are affected.

“There are still many communities, particularly those residing in villages, who could hardly implement new normal. Villagers commonly have social cohesion so that they feel uneasy when there is no close interaction among them,” said Risky to EcoNusa.

The community lacks awareness of Covid-19 transmission. That was obviously seen when there were public medical check and hygiene promotion as parts of EcoNusa Covid-19 Response initiative in North Maluku in Cooperation with PakaTiva last September 2020. Instead of digging out information on Covid-19, most villagers tended to get their ailment such as diabetes and uric acid checked.

However, the health team kept conveying the information on Covid-19 transmission and prevention clearly, including six steps of handwashing and health protocol. Health promotion was carried out at Jiko Cobo, Sirongo Folahara, Kalaodi, Maitara Selatan, Jaya at Tidore, and Gambesi, Fitu, Sasa, Ngade at Ternate. During the implementation, the event was done in cooperation with the local health center and Health Office and Mayana Group in Tidore.

To educate public to be more sensitive to Covid-19, PakaTiva collaborates with state-owned radio company RRI and local online media in North Maluku to create a jingle on healthy life to fight against Covid-19.

Jointly with PakaTiva, EcoNusa distributed medical equipment such as protective gear, gloves, and medical masks to two government-owned hospitals in North Maluku, RSUD Tidore and RSUD Tobelo. In RSUD Tobelo, the distribution of medical equipment is not focused on medical workers but cleaning service workers at the hospital. The distribution for RSUD Ternate and RSUD Sofifi would be done in October.

“Most medical workers have got protective gear from the government. The most concerned issue is the cleaning service workers as they just wore a raincoat. Despite the fact that they are not medical team, they also need protection as they should interact with medical waste and room that might be infected by virus,” said Risky.

Covid-19 pandemic also affects the community economy. The women working as tailor in Ambon and Seram are partly affected by the declining market demand. For the reason, EcoNusa also collaborates with women in Maluku Province to produce masks which are distributed to the community. To produce mask, it does not need any order to big factory. Those women have made 2,000 masks that are distributed to peoples in the local villages.

In addition to health support, the agriculture mentoring was also delivered to the community that is affected economically. Five villagers assisted by PakaTiva in North Maluku, namely Samo, Gumira, Posi-posi, Kalaodi and Moloku, are the most-pandemic affected villagers. During the pandemic, the market of villagers products such as coconut oil was affected. There were stock of coconut oil that was unsold yet.

To meet the need for food, the community should support the agriculture as the food security system during pandemic. Therefore, agriculture mentoring was addressed through an introduction of sustainable agriculture to prevent farmers from being dependent on industry’s seed and fertilizer. 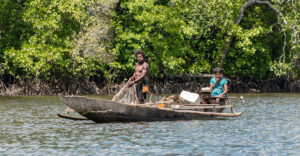 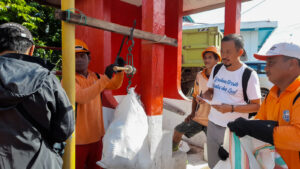 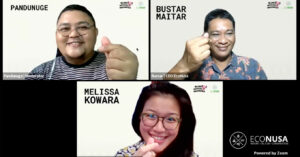