Teluk Arguni is a major bay separating Kaimana land into two parts, the west part with the border of Fakfak Regency and the eastern parts with the borders of Dogiyai and Mimika Regencies. The RSC team consists of 3 members of EcoNusa, 3 researchers of Papua University (Unipa) and 1 staff of Kaimana’s Regional Development Planning Agency (Bappeda). The team visited 7 villages in Teluk Arguni in 7 days 6 nights.

At the time, RSC team has loaded the stuffs on the boat travelling to the villages along the coastal lines and remote areas in Teluk Arguni. From Tanggaromi Port in Kaimana, West Papua, it is about 48 kilometers away to the first destination, Jawera Village. The sea travel took more or less 1-hour ride. The most faraway village is Pigo which is located 129 kilometers from Tanggaromi Port.

On the first visited village, the team got a warm welcome from Yonatan Mangke, the Jawera Village head. Based on the initial identification of Unipa’s researchers, the Jawera villagers rely on nutmeg as one of the main sources of their income. The seed and flower of nutmeg have the most economic value to the villagers. Meanwhile, the fruit meat is discarded. “We have no idea on how to process nutmeg meat. Besides, we do not know where to sell them,” said Yonatan.

It is not only at Jawera Village, the communities of 4 other villages also depend much on nutmeg as one of the major sources. Ruben Weferte, one of the respondents in Kokoroba Village, said, “The nutmeg crop is twice a year in October-December and March-April. The dried nutmeg costs from IDR28,000 to IDR30,000 per kilogram and dried nutmeg flower costs IDR100,000 to IDR120,000 per kilogram. But, none buys the nutmeg meat.”

In addition to nutmeg, the community of Jawera and Kokoroba also cultivate non-timber forest products such as durian, rambutan, langsat. While waiting for another crop, villagers in the coastal villages cultivate ocean products to meet their daily needs. Yonatan Mangke from Jawera, Yusad from Weswasa and Muhammad from Futernu shared the same concerns.

“Our daily chore is seeking fish, fish bubble, crab, shrimp. We sell them to afford sugar, salt and coffee,” said Yusad from Weswara.

Some respondents complained about the unstable price of nutmeg seed and flower. Prices are set by the collector that visits the villages.

“The collectors will normally come during the nutmeg harvest time to buy dried nutmeg seeds and flowers from the villagers with the prices set by the collectors,” said Yonatan.

Muhammad from Futernu said that the collector controls over the pricing of nutmeg. The collector will say that they have abundant stock of nutmeg so as to justify for buying nutmeg from the community with lower prices.

From Teluk Arguni, the team held a Focus Group Discussion (FGD) attended by the Kaimana’s Regional Apparatus Organization (OPD). Syafrudin, a participant from Kaimana’s Industry, Trade and Cooperative Office, said that market access for natural commodities such as nutmeg targeting outside Kaimana would be very hard if it is done individually. “The natural resources sold outside Kaimana should be operated by seller with legal entity,” said Syafrudin.

From the FGD, Muhammad Werfete, the head of Kaimana’s Bappeda, asserted that the government of Kaimana Regency has been thinking about a way out to improve the welfare of Kaimana community, particularly the native Papuans (OAP).

“We thank our EcoNusa friends who have helped ease the Kaimana Regency government in the context of economic empowerment,” Muhammad said. 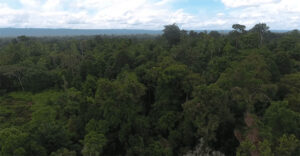 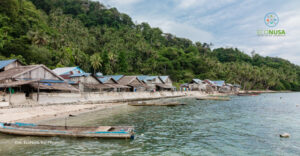 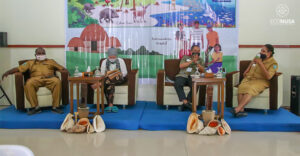